) talked a lot leading up to the bout, and she let her fists mirror the talking for her in the early goings, making it a quality tactical bout…but as time progressed

) class showed out, and she seized control en route to winning a comfortable points decision to defend her unified titles a total of 6 times, as well as tallying up 13 title defenses in the Lightweight division. With this out the way, there is actually room for the biggest fight of them all to be made in the women’s sport.

The first round, both boxers came out aggressively, and there was a different air about this one – perhaps from the back and forth talk that had been leading up to the fight. Sharipova showed no fear, and a determination to win, standing in the pocket, and taking chances with the right hand.

Katie remained poised, measured, got her jab working, and was looking for counter opportunities in the early going. Sharipova didn’t look out of her element in the early portions of the fight, with them both playing a high speed cat and mouse game, looking to prove who had the best boxing

IQ of the two, as well as the best

timing when inside of the pocket. 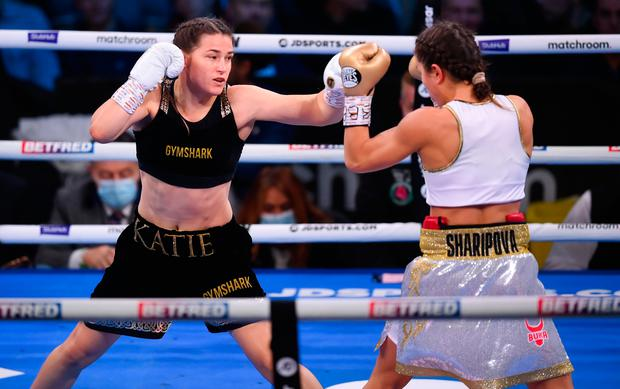 The best punch in the early going was a Katie Taylor right hand in the 3rd round, which brought the rage from Firuza out, looking to get a little payback. Taylor began to start feinting the right hand, then rounding out with the left hook, noticing that every slight movement forced Firuza to the left. The pace of the bout began to slow down, and that ultimately goes to the advantage of Taylor, who is the older fighter of the two.

Sharipova’s gumption carried over in the 4th round, and she was doing a good job of sneaking the short cross in up top from time to time, just enough to keep Katie honest. Noticeably here, both were trying to exert physical and mental strength over the other when engaged in clinches.

A good overhand right from Taylor in the 5th round set the tone. Sharipova’s

right eye began to deteriorate a bit, as she finally started to take control after they wrestled back n forth for it in the first 4 rounds.

Sharipova began to slow down – perhaps from the effects of the accumulation of sharp shots authored up in the round. Sharipova was deducted a point from hitting on the break, which was shaky on the Ref’s part, considering it didn’t happen too often. This prompted Firuza to get aggressive in her efforts to try and get the lost point back with a good round otherwise. Round 7 was the most important round of the bout for Sharipova, who was falling a bit behind. Both began to fight too eagerly, leaning over their front

foot, and their heads came together often, without much recognition from the Ref.

Katie’s jab here was doing the damage in the round, as she was beginning to drive through the

target with it as opposed to her just flicking it out there in the early going. The hard jab carried over to the 8th after he corner asked her to do more of that, and Sharipova was having difficult time figuring out how to deal with it. The challengers confidence didn’t dip, but you could tell from her expressions that she knew she was in deep, against the Champ gaining momentum.

In round 9 when a strong push was needed, Sharipova appeared to run out of the

gas needed to try and make a run, and Katie began to fight more at her desired pace, picking at the challenger from the outside with the jab, and right cross.

In the final stanza, Sharipova gave everything that she could on the inside, ripping some pretty good uppercuts. Katie inside was doing a brilliant job of chopping with the right hand to the ear with full force behind it. Both proud ladies fought their way to the

10th and final round.

Sharipova did well in the early goings, but Katie’s precision, and tactical adjustment brought her control that was needed to win the fight on clear terms. By way of Unanimous Decision on the three scorecards, Katie Taylor picked up her overall 13th Lightweight Title Defense, and 6th defense of her Undisputed moniker. With this out the way…could we possibly get the fight that we all want With Katie Taylor clearing her most recent assignment, the rumors surrounding the Holy Grail of women’s boxing in terms of matchmaking appears to be coming at a head, as the wheels are in motion. While Katie took care of her side, legendary 7-division, and current unified Featherweight titlist

🇵🇷Amanda Serrano has a fight next week in the Lightweight division against what will be a common opponent.

This is essentially Serrano’s way of standing firm in the division, and if she takes care of business, a blockbuster event between Katie Taylor and Amanda Serrano seems imminent – a bout that if staged, will produce in the eyes by most, to be the