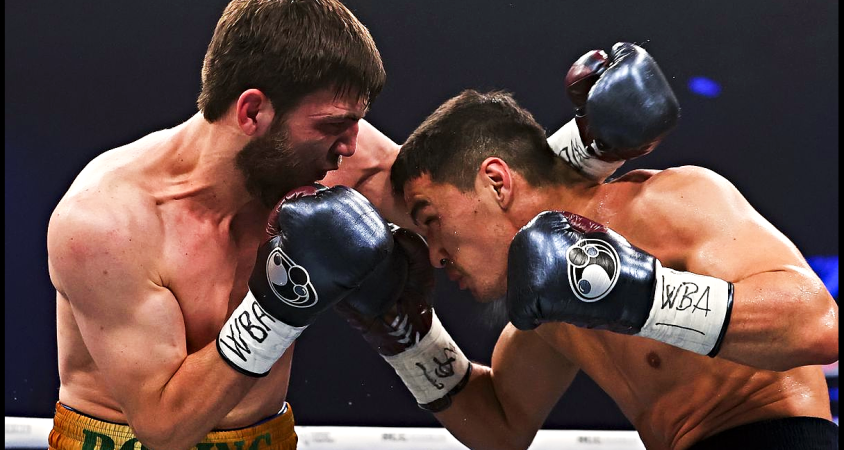 ) headlined a fight card for the faithful at

KRK “Uralets” Arena, Bivol proved to be levels way too sharp for the title challenger.

Salamov, though he lost wide on all scorecards, showed some impressive qualities about himself, and looks like a solid fighter that we would like to see him in with other good talent of less pedigree, for good matchmaking. Bivol, as consistent as ever, looks to be entering his

Salamov is big for the weight, but size isn’t anything new for Bivol to go against, as he is actually one of the smallest operators in the weight division. Salamov with stagnant feet wanted to fight in middle distance…but the problem is, that is what Bivol does best in his arsenal, and does as well as anyone else in the Light-Heavyweight division.

Bivol got the stiff jab going in the early portion of the fight to control the action center ring, often aiming the jab to the chest of the bigger man to get him to rock back on the heels of his feet to take him out of ideal striking position.

Bivol did a good job of mixing it up, sneaking in some cross, hook combinations, and utilizing he

lead hand in a multitude of ways to keep Salamov confused. Umar was doing a decent job standing his ground and flicking the jab, he just couldn’t string combinations together against the oddly-stingy Bivol defense. Salamov’s best punch landed was a hard right hand to the jaw in the 4th round. Despite perfect placement, and leverage behind it, it did zero damage to stop Dmitry in his pursuit of leading the action.

Dmitry upped his aggression in the middle rounds, and despite Salamov landing a couple solid, clear blows, Dmitry both times immediately retaliated with combinations, with all punches hitting the

target, and snatching the momentum back in his favor.

Bivol is one of the best in the business of remaining poised, and staying in control – everything that happens in the ring is at his pace, and the action is often dictated by him, without ever losing defensive integrity. Salamov was getting frustrated, as he was trying hard to get something sustainable going, but for whatever small spark he started, Bivol always found a way to snuff out the small brushfires.

Bivol was as consistent as we’ve grown accustomed to seeing, and Dmitry was perhaps at his best tonight, as a finely tuned machine, exerting his craft, &cruised on though the final bell of the

12th round. With no doubts in the air, the scorecards what we watched, a near shutout.

With good scores of

Some people have an issue with Dmitry Bivol overnight turning from a physical battering ram, into a clinical master boxer with a methodical approach. The switch may not be the greatest thing for the

excitement aspect of his position, and that can be off-putting to watchers…but you can’t deny its effectiveness.

Also in his situation, a physically dominant performance actually won’t do anything to make other high profile opportunities at Light-Heavyweight more makeable, so Bivol should continue to fight the way he does, because he’s the best in doing it at

The big fight on the table for him is the prospects of fighting unbeaten former Super-Middleweight world titlist 🇲🇽Gilberto “Zurdo” Ramirez, and that looks imminent to happen, as other contemporaries have their own saga to sort out. Surely Zurdo has the name that Bivol can capitalize on if he were to beat him, and show out with a great performance, so hopefully that is what will come next from that equation, with two elites primed to meet.