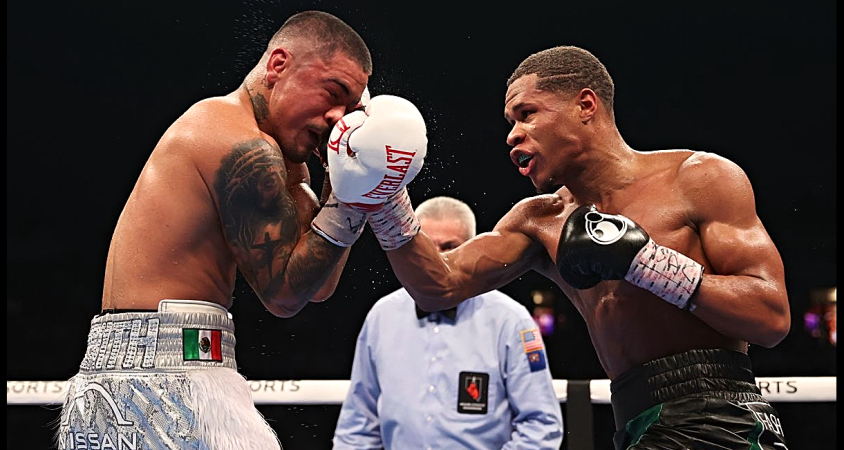 While the fight card as a whole was atrocious given the undercard with one sided fights, and quick hooks by Referees, the main event surely made up for the shortcomings, with good, clean action. High ranking Lightweight 🇺🇸Devin “The Dream” Haney (27-0-0, 15KO

). Despite some heavy mid round pushback by Diaz, Devin’s sustained work through 12 was the level of control needed to get through the assignment in what was an impressive showing. With George Kambosos Jnr. sitting ringside, Haney reiterated his desires to fight for all of the belts.

The first few seconds featured a bunch of

measuring between orthodox Haney, and the southpaw Diaz, taking good note on their defense and positioning. Both naturally counterpunch inclined, each was looking for the other to open up before offering up a combination attack.

Devin often pawed with the jab up top, then

Haney’s active work in the second round had Diaz a bit stuck behind the shell defense, as Haney began to get creative with the use of his lead hand, and firing the right hand in a wide variety of ways…some blocked, but enough getting through, especially considering that Jojo wouldn’t let his hands go in the moment.

Diaz came with a different fervor in the third round,

hammering away at the body inside with the right hand. It was by this point that Jojo was looking to make more of a fight of it, heavy on the front foot, while Haney began to circle out to box, and counterpunch. Jojo Diaz is one of the best body punchers in the sport, and he began to focus on the ribs of Devin to try and bring him down to size, to better handle the gifted unbeaten fighter.

Diaz began to get the upper hand on

timing in the fourth round, changing his rhythm, and landing pop shots with Haney stuck in neutral position. This allowed Jojo to get in closer and utilize angles to get his sharp combination punching off. Haney isn’t used to losing rounds, let alone sequences, so this was a round worth noting, in how Jojo was working himself in the fight due to a couple of tactical changes, and finding something that worked for him.

A good left hand to the body in the 5th drove Haney into the ropes. Bring more off-balanced than anything, Diaz continued to work off of it. In the middle of the round, Devin Haney switched up his defensive positioning, looking to be first on offense, trying to sneak the

shovel hook to the midsection, and looking to time the right hand.

They both began to pick the action up in the 6th round, and stood largely in middle distance, staying behind the careful guard, and finding cracks in which to exploit, with Diaz staying behind his right hook, and Haney keeping the stick out there. Haney at the end of the round was trying to corkscrew the right hand around Jojo’s guard, as he was beginning to get creative in his attack.

Round 7, Jojo walked out, and began to fire the hook to the head, hook to the body combination.

One thing noticeably about Haney is that as gifted as he is, he tends to get stuck on the ropes too often, which is where Jojo was doing the better work. Haney when he’s in the middle of the ring had the edge in precision.

Jojo landed his best punch of the fight in this round with a good left hand upstairs that got the attention of Devin. Jojo was beginning to grow braver with his exploits. Devin was looking to split the guard with his uppercut whenever Jojo leaned in, and utilized the right hand to try and keep distance, but this was a quality round for Jojo, in a bout that was beginning to

Round 8, with the righty and southpaw picking up assertiveness, their heads clashed a couple of times, but nothing serious resulted from it. Haney fought one of his

smarter rounds of the bout, keeping the range and using his 7 inch reach advantage to his benefit. It didn’t bother Diaz mentally, but it made him work a little harder to get on the inside where he is most effective.

Diaz in round, understanding that he was a bit behind on the cards, picked his energy up, and opened the round pretty strong. Haney was having success pop shotting with the right hand, but in this stanza, Jojo had an answer for nearly everything he did, and outworked Haney with sustainable, scoring activity. This was arguably the most exciting round of what was a solid tactical bout unfolding.

Round 10, Jojo was making a bit of a push, showing his high boxing IQ, and while Haney of course held his own, there seemed to be a slight momentum shift for Diaz, who was beginning to go into his deep

bag of deceptive tricks. Haney landed a nice counter right hand mid round to momentarily slow the action but aside from that, Jojo was controlling the bulk of the round in his favor.

Haney landed a beautiful 2 – 3 combination at the end of the round. It didn’t particularly hurt Diaz, but it was great for the optics, and could prove pivotal if any judges had the round close.  The Championship rounds were upon us, and the urgency between both fighters you could feel, as you could cut through the tension with a

Haney was especially sharp in the early goings here, landing some blistering uppercut counters, and checking the hook, finding the target that was often fortressed off by Diaz defensive positioning. Jojo was heavy on the front foot looking to make something happen, but it was ultimately taking him away from what was working for him in previous rounds, and that was staying in the middle range, looking to catch and shoot…and then finding moments where he could dart in and work. Haney, who was looking for a statement round, had just authored one up.

Round 12, they both came out hot. Some blistering action broke out in the round, with each taking as well as they were dishing out, hooks, body punches, everything in the book. This was surely a battle of will down the stretch. The uppercut was there for Diaz to land, but it is not a widely featured punch in his arsenal. Haney made sure to re-established the stick, and used it all the way through to the 12th and

final bell of what was a solid contest, grabbing the control of the round in the final minute.

David Diamante took to the mic, and by way of Unanimous Decision, Devin Haney won a very solid

Unanimous Decision victory in his favor – his best win in his young 23 year old career. Jojo Diaz acquitted himself very well, showing true world class skills, but as was the concern in the pre fight anticipation, Jojo doesn’t hit quite as hard as needed to bother someone of Devin Haney’s pedigree.

If he hit harder, perhaps we would see a different story, however that’s not how the story was written out for Jojo. Devin left a good soundbyte when interviewed by Chris Mannix, saying “I’d go to

Jupiter to get the fight” with potential foe

🇦🇺George Kambosos Jnr., for the chance to fight an Undisputed World Champion…to become one. Hats off to both high caliber boxers Haney and Diaz for a crafty bout.

THE BUILDING BLOCKS TOWARDS GEORGE BRINGING A FOE DOWN TO AUSTRALIA

🇦🇺George Kambosos Jnr. has made it a pointed effort to attend this fight, and to show up in the lead up fight week attractions here, of course partially as a fan, but also in getting a chance to talk with, and size Haney up a bit.

Cordially expressing his interest in fighting Haney in front of a 70,000 to 80,000 crowd back home in Australia next, Haney verbally agreed to taking the eventual trip to the land down under, however the action will need to follow the words in order to give it credence. 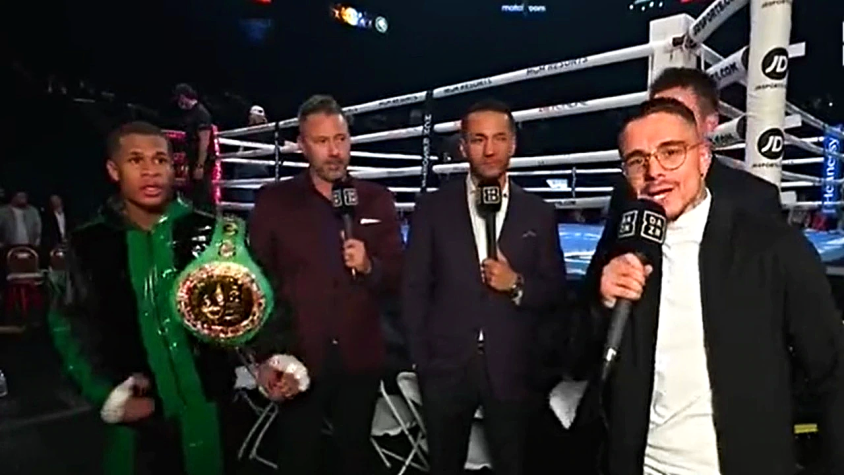 Kambosos Jnr. has made it crystal clear that his final list of potential opponents for his grand homecoming is down to two fighters, of course the aforementioned Devin Haney, and former Lightweight Champion of the World

🇺🇦Vasiliy “Loma” Lomachenko, who has expressed his desire to fighting Kambosos, given his career push towards earning the Undisputed moniker.

Of course Loma will have to take care of business against an eager 🇬🇭Richard Commey, and has been professional about not putting the cart in front of the horse when it comes to the fight & what looms, but if he does what he is supposed to do, then it will be a race with him and Haney towards who will commit first, and put the words into writing for a chance of firmly sitting atop the Lightweight division by proxy.