When you get a fight of this magnitude, no matter what type of fanfare the A-side fighter receives, we all want to see a legitimate challenge in order for him to earn his stripes if he does in deed prevail. Well tonight, that is exactly how it played out at the MGM Grand Garden, as

) found himself in a highly competitive chess match with a version of 🇺🇸Caleb “Sweethands” Plant (21-1-0, 12KO

) that he felt to be a bit slicker than he had anticipated, and had some interesting moments in his favor.

The amount of pressure that Canelo was supplying however from the third round on, was slowly mounting to a

climax, and Alvarez finally found his opportunity to close the show, putting Plant down twice in the 11th, to get the highlight knockout victory, becoming the Undisputed RING / WBA / WBC / WBO / IBF Champion of the World, making history in the process as the first to do so.

STARTING THE SHOW, CANELO AND PLANT MEET CENTER RING TO ENGAGE IN COMBAT

reach advantage, his movement, and his tendencies. Caleb Plant authored up a heavy dose of jabs that found the

target often, but Canelo’s prowess in cutting the ring off made Plant uncomfortable.

The second round was pretty interesting, as Canelo began to start finding success by holding Plant’s lead hand, bracing him while Caleb turned his head, finding cracks in the position to land the big right hand. Plant landed a couple of beautiful check left hooks in the round to keep the redhead honest.

By round 3, you could tell the heavy front foot pressure of Canelo was beginning to bother Plant a little bit, even though he kept his composure in large part. Canelo is arguably the best in the business of cutting the ring off, and for what was a 20 foot ring, Caleb felt like he had minimal space to work.

The 4th round thus far in the bout was by far Canelo’s best, as he finally found opportunities to let his hands go when Plant’s back would touch the ropes. He let off a barrage of shots while Plant attempted to weave the onslaught, but a good deal of damage was done there, and Saul carried forth his momentum well for the remainder of the round.

The 5th stanza, Caleb went into counterpunching mode, tightening the shell defense, looking to catch Canelo coming in after committing, finding some success doing so, but Canelo remained stubborn in his pursuit.

It appeared that Canelo may have found something workable in the 6th in his favor, and switched up his method of attack, utilizing the use of lead right hands with arc over the top, and considering Caleb’s style of defense, with the backhand protecting the

chin, Canelo was aiming the lead left hook to the top of the head by design.

The 7th round, Plant had some success early, and Canelo found himself on the ropes for a large chunk of the round, while Plant was selective in which punches he dished out. Canelo played a bit of possum in those exchanges, but towards the end of the round, he landed a serious

left hook to punctuate the round.

By the 9th round, Plant’s eyes were beginning to swell, but he had full control of his faculties, and kept the slick defense going, making Canelo miss. Plant threw a 6 punch flurry, where the first 4 punches were blocked, but the last 2 got in, and Canelo – a bit frustrated and embarrassed by the moment, backed off momentarily in a cheeky manner, then came forward to work the body till the

Round 11, Canelo finally found his opportunity, and he belted Plant with a strong left hook that buckled the legs of Caleb, then an uppercut, and another left hook that put Plant down for the first time in the fight, and in his career.

Plant, heavily bewildered, stumbled over to the opposing turnbuckle before acting Referee

Russell Mora Jr. finished his 8-count, and cleared him to continue. Plant tried to still hang in there…but Canelo unleashed the Fury lingering inside, to put together an emphatic finish, as he bludgeoned Plant by the ropes, before Caleb slumped down to the canvas one more time, forcing Mora to stop the contest.

The crowd at the

Undisputed Super-Middleweight Champion of the World. Appropriately wearing gold trunks for the occasion, he was draped with all of the belts in the bouts aftermath, and wore a gold crown to match his get-up. The 31 year old Alvarez rejoiced in the moment, as the crowning achievement of his career.

The pre-fight controversy was also addressed after Ring Interviewer

Jim Grey brought up that Plant said that the use of “motherfucker” was misinterpreted (the trigger that led to a bit of a scuffle some weeks back), and that he would never say that, considering circumstances in his own personal life. Canelo acknowledged it, they made amends, and cast it as water under the

bridge, as they had both earned respect for one another for their 11 rounds shared together. 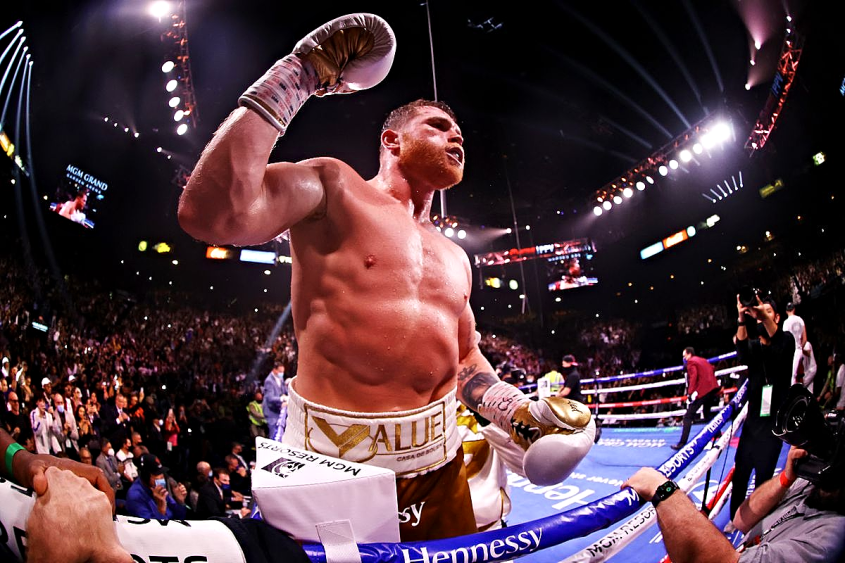 THE PROSPECTS, AND POSSIBLE BIG FIGHTS MOVING FORWARD FOR CANELO

What looms next for the redhead, who now has full claim of being an Undisputed Super-Middleweight Champion

Well the #1 rated Ring-Magazine contender is young, explosive puncher 🇺🇸David Benavidez, who twice had the WBC green belt, but lost it for reasons outside of losing combat inside of the ring, thus him being taken out of the immediate lineup considering that Alvarez had his eyes dead set on focusing solely on those who possessed world title belts for him to acquire, and collect.

If not, then Canelo Alvarez has the options to pull from the table, of 🇰🇬🇷🇺Dmitry Bivol down to 168 lbs., or for Canelo to move up to Light-Heavyweight, to challenge for Dmitry’s WBA title. He can also keep the door cracked for someone like a 🇺🇸Jermall Charlo to move up to take on the massive challenge, or even for Canelo to finally open up to a 3rd pivotal

🇷🇺Artur Beterbiev, which would have a strong legacy tie towards him reaching the apex of his career if he were to pull a victory off.

As you can see, given the multiple weights that Alvarez can cover, and plenty viable options for him to entertain bouts with from

160 – 175 lbs., especially with Canelo’s earning stature, and star power, he ultimately sits in the drivers seat, and has enough competition left over to keep him motivated so that he will likely never take his eye off the

ball. It will be interesting what he does next in his career going forward.