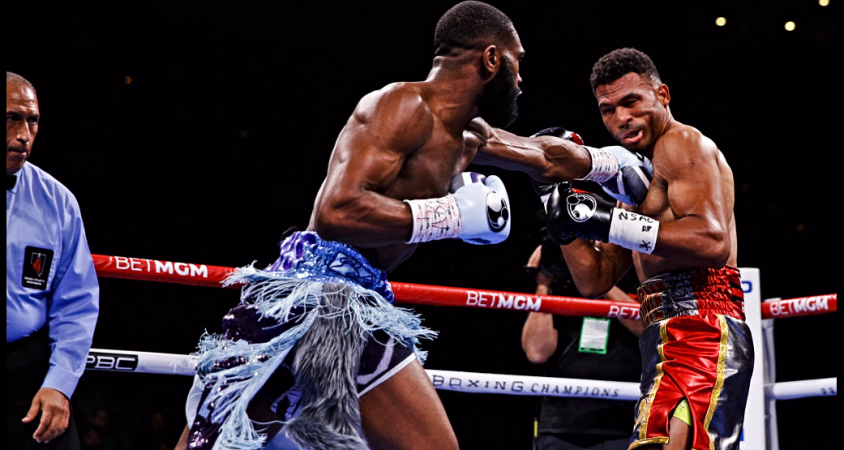 gatekeeper in the first round that will have the boxing world buzzing, as Dulorme has never been knocked out in his 13 year career as a professional boxer. Boots remains undefeated, and will certainly move up in all sanctioning bodies at Welterweight, as a fighter who on his best day, looks capable of defeating whoever they put in front of him.

The switch-hitting Ennis came out fighting in the orthodox stance, and he stayed behind his lengthy piston jab, that Dulorme could neither see, nor defend against. Neutralizing his abilities with that weapon, Boots blasted him with a chopping right hand downward, catching Dulorme as he was trying to duck the punch, and forcing him to crumble down to the mat.

On his knees and forearms, Thomas took the full

8-count, and got up, but he was rendered on very unsturdy legs. He had all his mental faculties in order however, and was okayed to continue by the acting Referee.  It’s bad enough getting put down, but it’s even worse when you’re back in the action, and the fighter who put you down switches stances to bludgeon you with a different array, and angle of punishment.

Boots switched to southpaw, and made frequent use of his left cross, changing the delivery multiple times, arcing it around the guard, shooting it straight, and using it to overpower Dulorme. Thomas did land a couple of decent right hands when Jaron was opening up…but it did nothing to slow down the onslaught of the supremely gifted Philadelphia fighter. Ennis seconds later landed a right hook, left cross combination that put Dulorme flat on his back for the second time in just under 2 minutes of action. 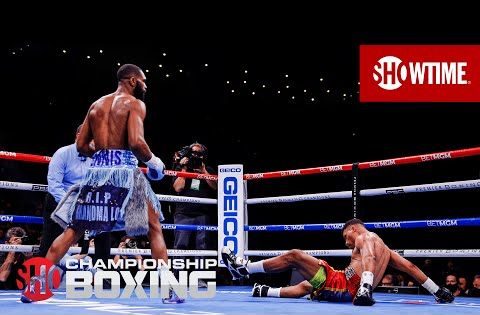 Dulorme’s mind told him to get up….but his legs did not get the signal, and he was counted out…the

strong chin of Dulorme was blasted, and Jaron Ennis once again, shows out in securing another knockout for the growing highlight reel. The 24 year old came into this contest ranked #7 Welterweight by

He will certainly continue to rise in the ranks, as he will leapfrog his way towards increasing demand for him to secure a soon-to-be world title shot. Being that his ranks are high all across the board, it puts him in a range that will make it difficult for him to be denied an opportunity at one of these titles when the time officially comes.