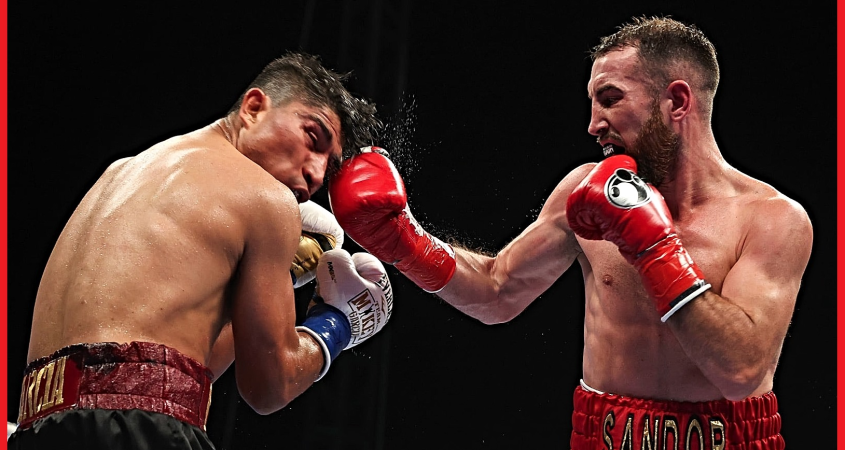 ) nickname is “Arrasandor”, which means “devastating” in English. Well tonight, that nickname is apropos for what happened tonight regarding his opponent, that being notable former four-division titlist 🇺🇸Mikey Garcia (40-2-0, 30KO

) suffering what was a monumental Upset defeat at the hands of Martin, who thoroughly out-boxed him through their 10 rounds shared in the ring together, witnessed by those at

Known throughout the boxing world, Mikey Garcia is a notoriously slow starter, who will take his time typically in the first three rounds to get a feel for what you react to, your punch speed, power, your gameplan, and what to look out for. Not much was done in the opening stanza, and Sandor early on didn’t appear comfortable inside of the ring, which is understandable, being that not only had he not fought in the United States before, but hadn’t encountered a fighter that was once spoken of in

P4P circles, or at least one who is revered as a tough out among the elite contingent.

By the second round, things became interesting as Martin routinely snuck in some check-right hooks (he is a southpaw) whenever Mikey wanted to initiate something on the inside, and began to pivot off of it, to get off the ropes, and away from the turnbuckles. The feeling by all (including us) was how long were these tactics going to continue to work, when Mikey decides to turn it up

By the time the middle of the third round came about, there were no noticeable changes to Mikey’s approach to what was taking place, and you could see Sandor’s confidence growing in live time. 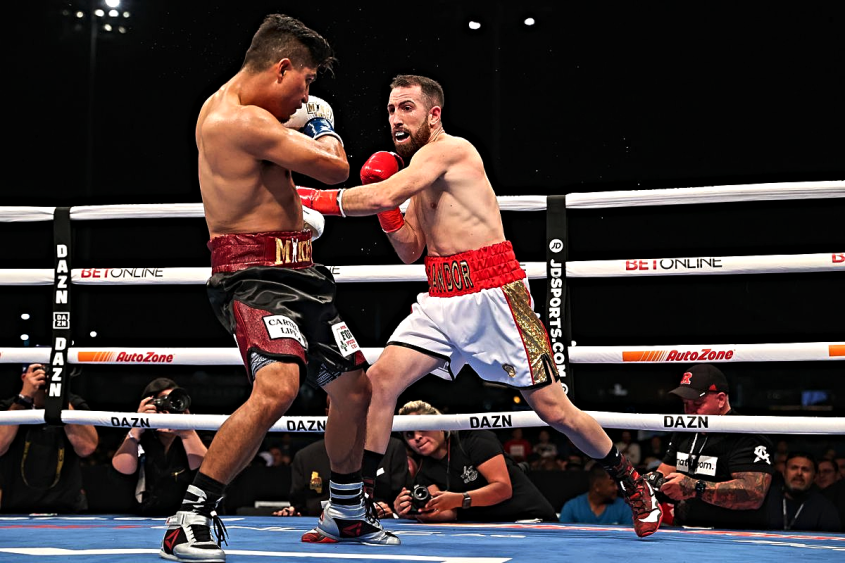 smart enough to not stand in the firing range long enough, but what he had going for him was that he had established the check-left hook, and got in a few left hands with enough pop in the punches to keep Mikey at bay, as opposed to him bull-rushing Martin for what would be a lack of threat with limited power. Mikey looked a bit sluggish, which is to be expected with a 20 month layoff since his last fight with 🇺🇸Jessie Vargas.

Also a disadvantage is him continuing to fight at Welterweight, a weight that he doesn’t belong at (it was a

144 lb. catchweight bout), but far more disturbing was in Garcia not making any adjustments whatsoever to thwart what Sandor was doing. Martin was stubborn enough (in a good way) to stick to his gameplan, and whenever his back touched the ropes, he fired the hook, ducked down, and escaped to his right, to retake center position in the ring. Garcia seldom cut the ring off, nor did he make real use of the left hook to frame Martin on the ropes – even if he blocks it, the force of the punch would’ve kept him on the ropes, for Garcia to work. 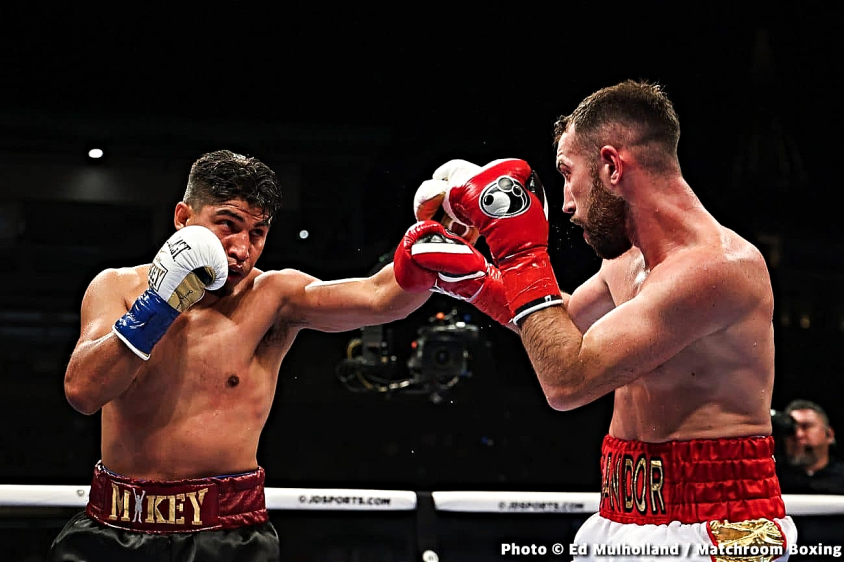 By round 6, Sandor began to open up a bit more, finding home more often with the lead left hand, and there was inexplicably no sense of urgency coming from the Garcia corner, or their fighter Much of the same continued for the next couple of rounds, but the 9th round is where Garcia began to assert himself, trapping Sandor in the corner, and swinging for the fences, landing well enough to make his presence felt, but not well enough to severely hurt the supremely confident Spaniard who had history on the mind.

The momentum that Mikey forged in the 9th round, did not carry over in the 10th and final round, which is what he needed to close the show, but instead it was Sandor…who early in the fight was skittish worrying about Garcia’s power, actively standing his ground in the final frame, and defiantly offering up some combinations, much of what Mikey had no answers for, which honestly was baffling to see. At the 10 second clapper, they both threw whatever they had left in their arsenal, and did so all the way up to the 10th and

final bell of this bout that was a non-title bout.

world seen what happened, and knew that Martin had won the fight, with the only kickback perhaps coming from the Garcia family naturally. The last hurdle was the one that makes boxing onlookers sick…would the judges get it right

We’ve seen so many deserving fighters in these last few years get shorted by blatant corruption and/or incompetence on their part, and the worry reached its zenith when the first scorecard read had the fight a 95-95 draw. Bringing some sanity back to the picture were the two other Judges, who scored it accurately, and as you would expect, Sandor Martin went ballistic when his name was announced by Ring-Announcer

David Diamante as the winner. 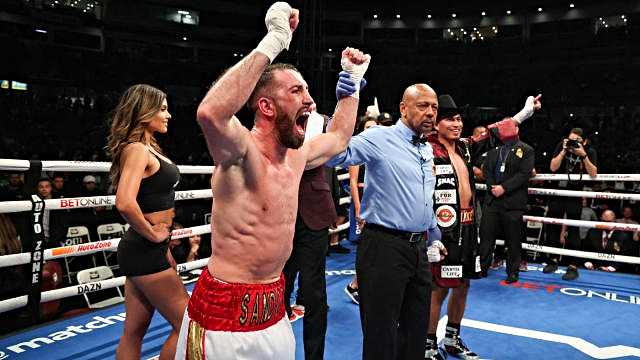 The PTSD we all feel about the perils of scoring immediately left, as what we all witnessed happen, was fully credited for happening, and justice was served in terms of awarding the proper man for his efforts. A side note – We were disappointed all night with the DAZN cast referring to Sandor Martin as a nobody. Even though it wasn’t done with negative intent, they (especially 🇺🇸Sergio Mora being a former boxer) should know better than to refer to the Spaniard by that reference – instead they should have just called him unheralded, due to the obscurity surrounding his name, being that he was an enigma to many coming in the fight.

Now as for Mikey Garcia, he felt that he was in control of the fight, and that he should have won it. Apparently he must feel that because he is the one moving forward, that he is dictating the pace and tempo of the fight, and it amounts to some measure of a points total in his favor…but it was Sandor landing at a much more consistent rate, and turned him throughout the entire fight. While Garcia expressed his displeasure for the verdict, he remained respectful to the judges regardless of drawing the short straw.

– This was one of the biggest upsets of the 2021 calendar year. It’s negative impact isn’t just due to that, it’s what it really means for Garcia. Everything considered (we will get to those details in a minute), Mikey coming up short against the relatively unknown Martin, may have just shorted Mikey of

8-figures in his career going forward. If you survey the entire landscape, this takes him out of the running for an immediate big fight, unless someone wants to use his name as one to possibly boost their resume. The legendary 🇵🇭Manny Pacquiao was to be his big lotto ticket in terms of a money/acclaim fight, but it didn’t happen, and now Manny has fully thrown his hat into the Political realm back home, and had put boxing in the rearview.

There was a pending fight with 🇺🇸Danny Garcia on the horizon, but it never happened, and Danny is moving up a division to Super-Welterweight. Someone like 🇺🇸Keith Thurman is half-retired, so good luck getting him anywhere close to the ring. Now if you look at the Junior-Welterweight landscape, there are good fights for him to get in terms of a challenge, but none of those proposed match-ups are money fights in the slightest sense…with the exception of a match-up with 🇺🇸Gervonta “Tank” Davis (maybe we’re onto something there?).

🇺🇸Regis “Rougarou” Prograis was pissed off after the fight, expressing his displeasure, and said he will definitely not fight Mikey right now after that performance, which is sad considering that they could’ve had something inked to face each other next.

So now the question is, where does Mikey Garcia go from here

We have absolutely no idea. He is 33 years of age, and spends entirely too much time out of the ring, only fighting 8 fights in total since 2016. That’s something he’s going to have to figure out. Now as for the victor SANDOR MARTIN…I wish there were more to say about him, because this is HIS night…..but up till now, we really don’t know that much about the guy and his personal life, so there’s not much to say…but considering what he had just accomplished, we will make a pointed effort (as we all should), to get to know the proud fighter, who is no longer unheard of.