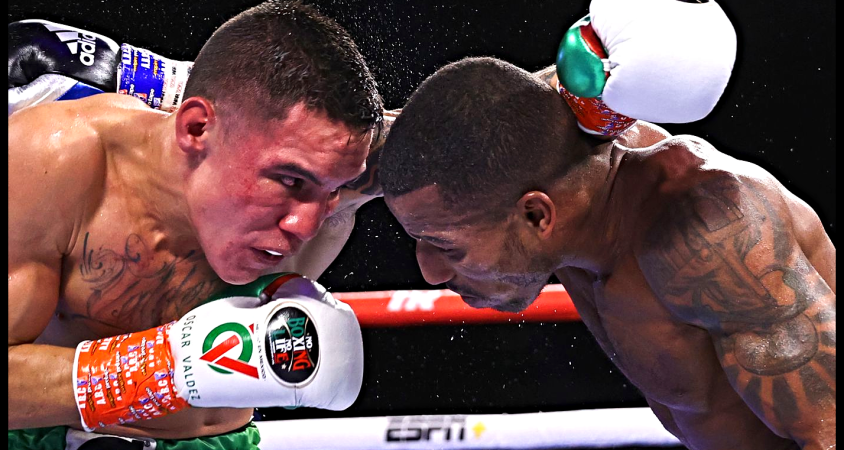 This bout truthfully comes down to what you like….do you favor quality early work

do you prioritize the strong finish?…do you consider true outside boxing running?…Does consistency through 12 rounds push to the forefront of the criteria?…and how much does a network broadcast team influence you as opposed to what you see with your own eyes? There was a lot of angles & takes that we are forced to look at in WBC Titlist 🇲🇽Oscar Valdez (30-0-0, 23KO

Robson Conceição got off to an assertive start, while Valdez pushed himself down the stretch, and given the way that the judges interpreted the action, Oscar Valdez walked away with a Unanimous Decision victory to remain unbeaten, and making the first defense of his

WBC Super-Featherweight Title. Looking at spectator reactions across the board, there appears to be a schism between who they felt won the fight, what they believed they had seen, and how completely off-kilter the ESPN

commentary crew was, to embarrassing degrees. We will go into full detail of tonight’s events. Both fighters stood their ground in the opening frame, with Conceição getting the bulk of the work in with a sophisticated body attack, making Oscar feel the power early. Valdez landed a few clean blows over the top, but nothing consistent. Both got each others respect early in the 2nd round landing significant blows. Conceição was very active, though Valdez did a brilliant job defensively to pick off most of the onslaught, but Conceição was able to land effectively to the body in spots of the round.

Valdez with a big right hand in the 3rd round stumbled Robson, but there was no added momentum attached to it, as Conceição remained stubborn, dug his feet in the canvas, not willing to give up any space, or the mental edge in the instant, and continued to pepper Oscar with the jab, which gave him problems with his range of distance.

By round 5, Conceição did a beautiful job of diversifying his arsenal, changing his levels, taking up the angles, doubling up on the left hooks, and round-housing the right hands to get it around Oscar’s guard, as he developed big time command over Valdez the champion. The 6th round showcased a

flip in momentum, as the Brazilian Conceição began to give up a little too much ground in terms of the real-estate, and Oscar feverishly 📈ramped up the mental pressure, landing heavy left hooks to the pit of the stomach, and to the jaw, making his mark in the moment, though Conceição still managed to have success in chunks of the round.

Round 7, Valdez got the upperhand in the cat and mouse game at the backend of the stanza, and continued to press forward with effective action, targeting Conceição to the chest. Round 8, Conceição did a much better job in stringing his shots together, despite the explicit bias commentary authored up by the

ESPN commentary cast throughout the action.

Even up to this point, this was the most flagrant example of biased commentary that the sport has seen in years, as the cast (most notably

🇺🇸Andre Ward) constantly talked over the effective work that Conceição was doing, stepping on 90% of his work with lead boots, with no acknowledgement, while littering him with overhearing negative commentary irreflective of the action that was being produced, and only doing so because he (Conceição) wasn’t fighting the style of fight that HE wanted him to fight, something that is a no-no in commentary settings regarding the job description.

Now with that nugget planted in mind, let’s get back to the fight. In the 9th frame, Oscar began to regain some momentum. The Referee

Tony Zaino inexplicably decided to take 1 point away from Conceição without any visible warnings for rabbit punching, taking the point for what was very light taps to the back of the head, nothing to warrant his decision to make that ruling whatsoever – a very poor job. Also looking at the fight, it appeared that he also had an axe to grind of some sort with Conceição…why

we’re not sure…but what is noticeable gets noticed, and we have to note it.

The 10th stanza was the most exciting of the bout, with Conceição standing firm, understanding the magnitude of the point deduction, and the ironclad tough Valdez getting in there inflicting damage, with Conceição’s left hook being the biggest punch landed, rocking Valdez back on his feet. Both were buzzed during the round with significant shots upstairs.

Ironically in the 11th round, a deliberate rabbit punch from Valdez only warranted a warning as opposed to the point that was taken away from Conceição – further demotion of the Referee and the way in which he conducted himself in this bout. Conceição landed a strong right hand up the middle in the waning seconds of the 11th, opening up a distinguished cut that drew

With round 12 a pivotal one for both fighters in the lasting statement they were looking to make on their behalf, Oscar’s inner dog took centerstage, as he dug deep, and finished off the round big, while Conceição essentially played prevent defense (an

He felt that he was wide ahead from a points perspective, and cruising towards a decision, as opposed to letting it hang out…which is perplexing…if inexcusable, being that he is fighting in the popular Champion’s hometown, which is a built in advantage (sad to say) for the house fighter in that setting. As the fight got to the

final bell, both raised their hands as they felt they did enough to pull the victory off respectfully, but it was only Conceição who celebrated feeling confident about his work.

There was a terrible scorecard in the mix

(I mean come on, are any of us surprised at this point?) where one judge scored it 117-110 for Valdez. The other two judges issued forth scorecards that could be rendered within the wide range of plausibility in the debate as to who won it, but all in all, the three judges awarded Oscar Valdez the Unanimous Decision victory in front of his home crowd. Conceição was cheeky with sarcasm in smiling after the bout, and the way he serenated the crowd, as he felt he had done enough to get the victory.

Oscar seemed agitated after the fight at Conceição himself, stating that when he egged Valdez on, that Conceição actually spit at him. We didn’t see that on the live broadcast (or perhaps we missed it), but something we should look for in the replay of this bout, as I’m sure many of us will

re-watch for clarification purposes in how we scored it, and for whom.

This was a rematch between the two fighters, as they had met in the

Pan-Am games 12 years ago in 2009….and just like this fight tonight, the verdict was a controversial one as well…despite time and circumstances changing for both Valdez and Conceição, they still relatively even out in terms of skill level. 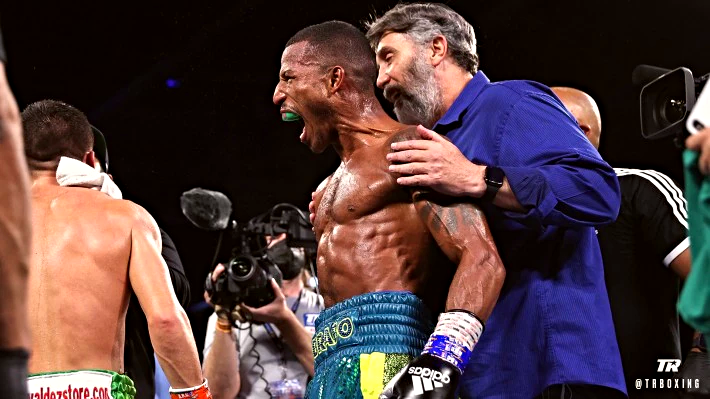 With the way everything unfolded in this main event, it was every bit as frustrating as the Valdez coverage in the weeks lead up given his positive test revealing

phentermine in his system. For Oscar’s sake, having the bout in his backyard with home support seemingly went a long way tonight, as he visibly seems bothered by the negative coverage that has come his way (his doing). With that being said, the question becomes “where do they go from here?” for both pugilists.

Oscar may have a Unification bout in mind between the winner of the mega-fight between WBO Super-Featherweight Titlist 🇺🇸Jamel Herring, and super-contender

🇺🇸Shakur Stevenson…but at this point, some damage control will be pushed to the forefront of his agenda as he is looking to turn the page so-to-speak with fans. As for Conceição, does he now become an avoided fighter by the elite contingent as sort of a new boogeyman presence? Things could easily turn that way for the 32 year old Gold-Medalist all things considered.