The week is here, where two of the elite Bantamweights in the world will accompany each other in the ring. Explosive Filipino WBO Bantamweight world titlist 🇵🇭John Riel Casimero (30-4-0, 21KO

) will look to take the difficult challenge of defending his title, against Cuban legend, and former RING-MAGAZINE Super-Bantamweight Champion of the World

), who at his advanced age, is still capable of making great things happen inside the ring.

It was a rollercoaster ride getting to this point, considering that this was the original fight on the rollout, then it being cast to the side for an even bigger fight in terms of current acclaim, and the monetary factor, with Casimero supposed to be pairing up with Filipino boxing legend and WBC World Titlist 🇵🇭Nonito “Filipino Flash” Donaire, but several off-kilter moves on both the business, and personal tip made Nonito feel compelled to shelve the fight, thus giving Rigondeaux the opportunity to swoop back in there, so that the original fight rollout could be reinstated.

Casimero (who has won a title in 3 different divisions) has 1 WBO title defense under his belt, and that was 11 months ago, when he defeated #1 contender 🇬🇭Duke Micah, blasting him away with a barrage of power in the 3rd round of their contest. Casimero at this point of his career has game-changing power, and that was especially evident in his fight prior to Micah, where John Riel strong-armed the WBO Title away from then holder 🇿🇦Zolani Tete, who ranked as one of the best in the division. His power will be the virtue that he will bank on most in this upcoming bout to try and take the Jackal out.

For Rigondeau, he is (on paper) to be 40 years old, though there are legitimate cases of evidence to where he could be anywhere between 43, and even upwards of up to 50…but given the difficulty in verifying documentation of Cuban fighters, we may never know exactly how old he is. With that being said, even though he is past his prime, he is still a very crafty operator, who is able to fight at a very high level, as one who relies of his fundamentals with both his hands and feet, who still can counterpunch with the best of them.

122 lbs. He defeated 🇲🇽Julio Ceja by 8th round TKO, and he won the “secondary” WBA title in his next outing, when he defeated well ranked 🇻🇪Liborio Solis in what was ruled a Split-Decision victory for the Cuban fighter.

Rigondeaux moved down a division in hopes that he could get in with some big fish in the division, and on Saturday, August 14th, he will certainly be in with one of the most dangerous operators in the

118 lb. class, and will look to add one more brilliant chapter to his boxing career, to further compile on his HOF stature. This will take place at the growing legend of

Dignity Health Sports Park, and the fight card will be broadcast on 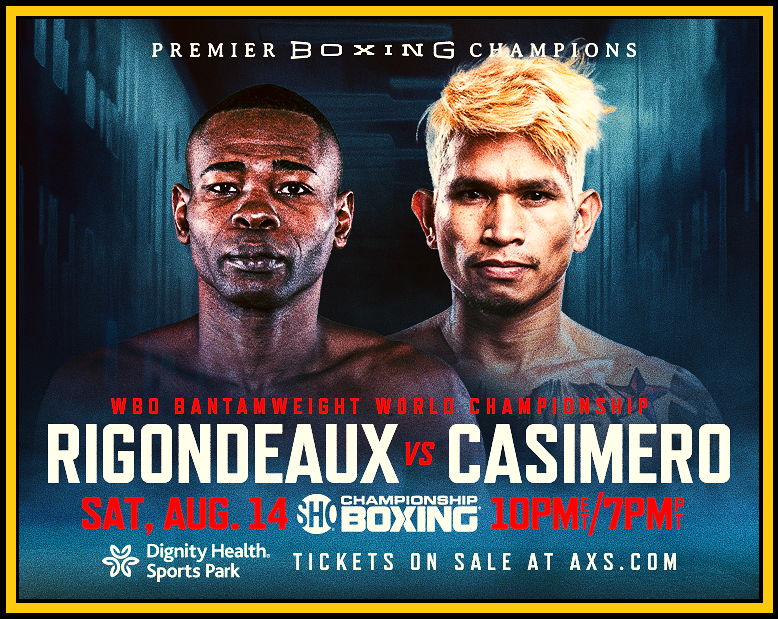