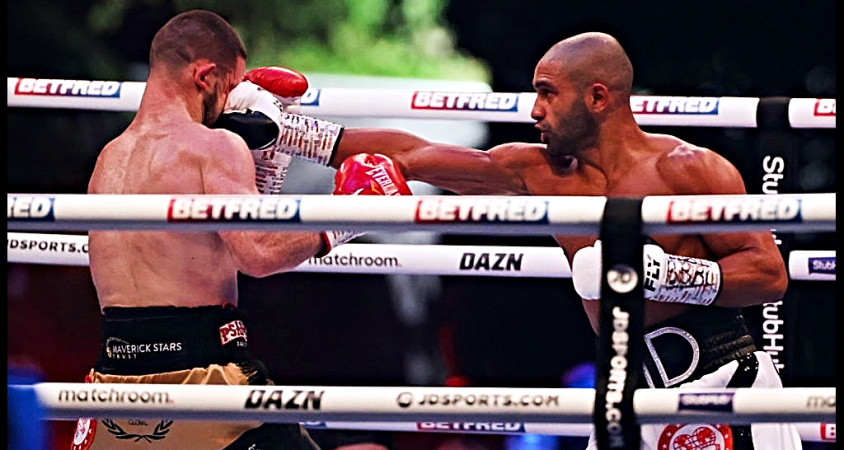 The first four rounds started interestingly, with both boxers having their moments, but class, strength, and tenacity began to show up, and show out for 🇶🇦🇬🇧Kid Galahad (28-1-0, 17KO

) took a merciless beating for the duration of the fight. Dickens bled out profusely, and featured heavy swelling around both eyes, to the point where the Ref had to step in, to stop Dickens from seeing the 12th round to avoid further punishment. Galahad is now the new IBF Featherweight Titlist, and his place in the division has to be considered strong towards the top.

Dickens was the first to establish himself, being able to sneak the left hand through Galahad’s guard up the middle in the ongoing. Galahad kept switching back n forth between orthodox and southpaw to find answers, and get a better view of his opponent, as Jazza stuck to the gameplan of darting in and out, feinting, using the lead left hand to freeze Galahad, and targeting down to the body to keep him honest.

Galahad after a certain point realized that the body was wide open, so he began to shovel in some hooks under the guard when he was in range to land effectively. By round 5, the strength difference for Barry (Galahad’s real name just to ward out confusion) began to present himself, as he was digging his feet in the canvas, firing the power, while pushing forward on his front foot at a higher clip. Jazza was a fully confident fighter in there, and was taking up the angles, trying to time, and counter Galahad when coming in, doing a good job of doing so, but also taking good return fire.

Jazza’s face was completely busted by by round 6 due to the high rate of pinpoint activity by Galahad, who sacrificed power for accuracy, forcing

blood to spew profusely out the nose of Dickens, with his

left eye harboring heavy swelling from the accumulation. The heart was there for Jazza, but the wear and tear on the body was visible. Nonetheless, he strung together his best combination of the fight in the 7th round, that being a left uppercut, right uppercut, and left cross to cap it off, doing anything he could to stop Galahad’s momentum that he had established.

Sadly, for Dickens, he doesn’t have much power at all, though he is able to do a lot of things. He landed quite a few flush shots, to where if he had a little more sting behind his punches, he would’ve had the ability to change the

tide of the fight, but in large part, Barry walked through his best shots, to continue to stay on top of him with superior craft, and conditioning. The white

trunks that Galahad wore into the ring, was drenched in Jazza’s blood, which by itself portrayed the events of the fight, and what was unfolding in front of our eyes.

Both eyes were heavily swelled, and the crookedness of his nose indicated that it was possibly broken…what was holding Dickens up at this point

his desire to win at all costs, and mental fortitude, but he couldn’t quite find what was needed to stop Barry in his tracks. A point was taken away from Galahad in the 10th due to repeated rough-house tactics, but at this point, it was largely academic, and didn’t matter within the scope of the bout.

Round 11 harbored the most brutal

package of punishment that I’ve seen in a while for a fighter to take, that being Jazza continuing to get bludgeoned by Galahad who looked to have an unlimited motor, with more blood coming down, and Dickens eyes both continuing to swell up further. He took the beating like a man, but it was very concerning about if it was safe for him to be able to continue forward in the bout, let alone if it would be a good idea by this time to even let him see the 12th round. Galahad showcased a cold hearted execution of what he wanted to do, and never let up.

The concern in the corner forced Referee

Michael Alexander to step in and say no, deciding to stop the fight to save Dickens from the onslaught, and from himself, being too tough to give in on his own accord. The stoppage means that Kid Galahad would finally see his dream come true of hoisting a world title belt. The

IBF belt, while draped around his waist, matched the blood that was seeped into the trunks, which was a fitting image of what persisted. 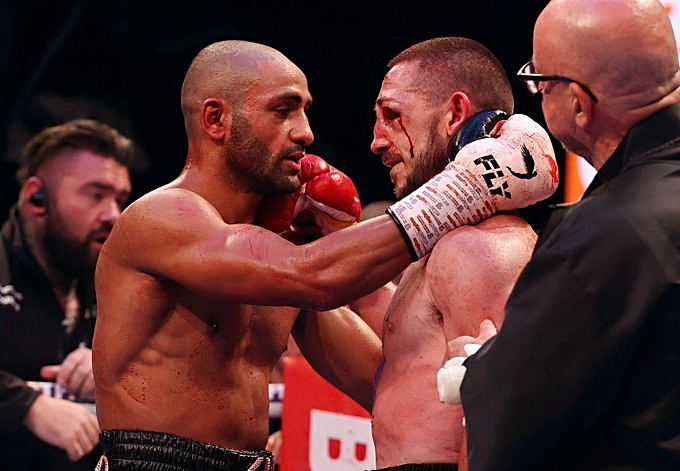 Galahad has to rank as one of the best Featherweights in the world – especially with extreme turnover in recent years due to a plethora of upsets, inactivity, and constantly moving parts in the

126 lb. class. All in all, it was a brilliant performance by Galahad, and one wonders what the future holds for the 31 year old new titlist.