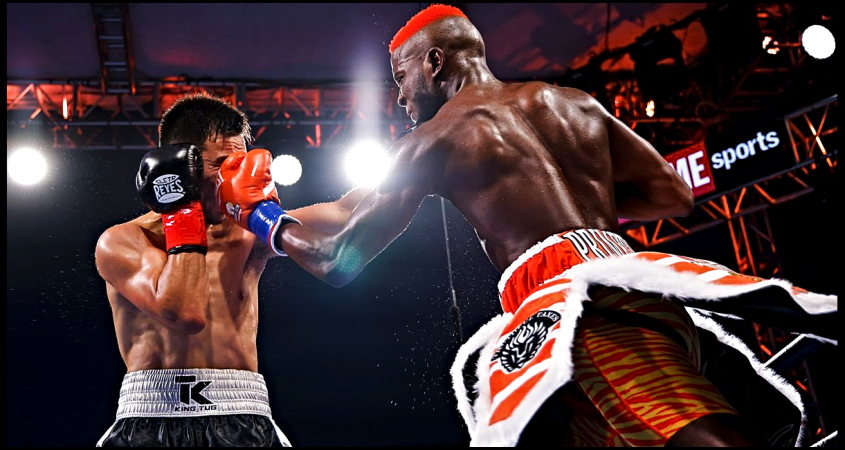 ) put forth a skill, and timing display to dispatch of Olympic Silver-Medalist, and Featherweight contender

) to get the Unanimous Decision verdict in Carson, California. Colbert’s use of the stick jab from both orthodox and southpaw was able to freeze Nyambayar in place often enough, though the Mongolian fighter did well in spurts of the bout, which Colbert revealed post-fight that he was impressed with, especially given that he took the fight on 2 weeks notice.

Nyambayar came out of the gate aggressively, throwing a big combination, and sneaking in an impressive right hand at the tail-end of it. As Colbert settled more into the fight, his blindingly fast jab was used to constantly pepper Tug, visibly bothering him as he was trying to adjust to the speed, and looking for ways to get around it. The switch-hitting Colbert went southpaw to start the second round.

He switched back n forth a couple times, looking to pop-shot with the right hand, and the uppercut, while Tug was looking to catch him with something coming in. Tugstsogt’s whole game plan for this fight was

timing beats speed, and he was looking to make Chris pay. 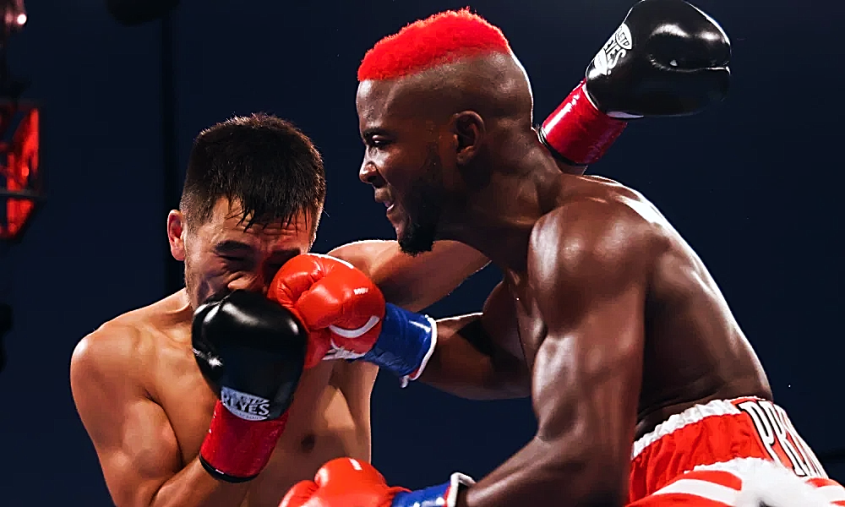 The third round was very interesting as Tugstsogt caught Colbert with an excellent left hook, and stepped in to

hammer him upstairs while Chris was on the ropes, in an impressive sequence of action. Colbert absorbed the punishment, and came back with some strong work in the middle of the round for payback. Colbert did the bulk of the work here…though it’s notable that Nyambayar got in a good right hand at the end of the round.

In the 4th, Colbert decided to arc the right hand instead of throwing it straight to get around Nyambayar’s guard, and had success in landing the punch. This was one of those bouts where the underdog had very impressive instances of combination, and counter-punching, but the higher

volume workrate of the more naturally talented fighter took a firm command from the points aspect, and round 5 was a perfect embodiment of that.

The sixth frame is where Colbert put forth the extent of punishment, as Nyambayar was a step behind the speedsters prowess, who made Tugstsogt pay every time he leaned over his front foot, or fell out of position, routinely getting countered for the full 3 minutes of the stanza. Building upon the momentum of the previous round, Colbert began to walk Tugstsogt down in the southpaw stance in the 7th, looking to compile upon the mental pressure in trying to break the smaller man down, and take his will.

Tugstsogt wasn’t discouraged about the pressure…though he realized he was falling behind, so he continued looking to land through the small cracks of Colbert’s defense. He did land a sweeping left in the round though. Colbert got back to his guns, and put forth some good work off his back foot.

King Tug did some of his best work in the 9th round, unfortunately his best wasn’t able to get ahead in the scoring aspect, plus he didn’t appear to have the one punch power needed to shift the tide of the fight, and hurt the talented American – after all, this is his first fight at the weight, and he isn’t a dynamite puncher at Featherweight, so he was stuck in no-mans-land in terms of what to do.

Colbert exhibited beautiful footwork in the 10th, and featured a strong dose of jabs once again to keep the Mongolian at bay. Colbert is one who could be considered a top-10 jabber in the sport of boxing today, and he knows  what side that his

buttered on in terms of making it a priority as his best punch. You could consider what he was able to do here brilliant work, as Nyambayar is a very good fighter in his own right, albeit one who was without enduring a full camp.

Down the stretch in the fight, Chris resorted to pop-shotting, and utilizing the footwork to get around his opponent, and that factor, as much as any other, was the reason why Tugstsogt couldn’t quite get to him on a consistent basis, the footwork. The effort was there, but by the time he committed to punching, often, he was left throwing at a ghost. The 12th round, Colbert was playing prevent defense so-to-speak (an

American football reference), which made the crowd sour a bit, however at the final 10-second clapper, they both unleashed the haymakers and whatever else they had left in the reserves, finishing the fight with a bang all the way up to the

117-111, 118-110, 118-110, Colbert picked up a solid win to put on his resume, as he continues to build his profile towards being looked at as one of the most skilled fighters in the Super-Featherweight division. We scored the bout

118-110 as well, to highlight scoring consistency.

Colbert was gracious in his victory, even going as far as to give Tugstsogt his props for taking the fight on only 2 weeks notice, and even thanked the Mongolian fans for coming to the arena in Carson, California. The sky is the limit for the young, talented, flashy fighter, and I’m sure he is on everybody’s radar as a potential problem that they will have to deal with. The

130 lb. division has serious…serious depth, and Colbert is deeply woven into the mix.