), putting him down in the final round, and forcing the Referee to step in and stop the onslaught of punishment.

The switch-hitting titlist started the fight out in the orthodox stance, and immediately belted Cordova with a couple left hooks to the cheek to command the early respect Cordova lacked proper technique, but no one could tell you he wasn’t determined, as he put forth the effort of someone trying to pull off the upset.

Martinez is known for his fast starts, and nothing was different there, but Cordova looked to match his energy. Martinez belted him a couple times with 2-punch combinations up top, with power on them, and Cordova would smile, shake it off, then try to land his wide winging hooks, and roundhouse right hands. This certainly wasn’t a fight that was lacking in action in the overall equation. 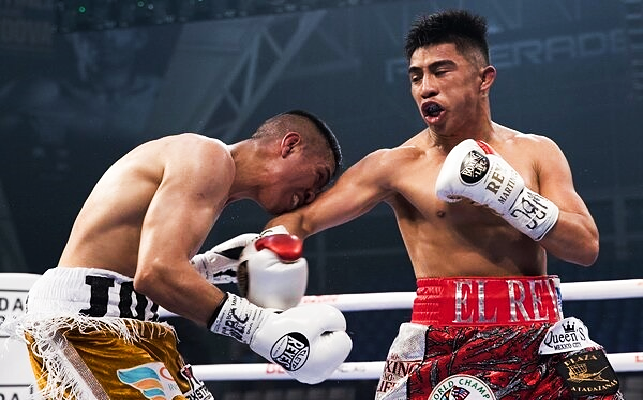 Cordova lunged in and landed a good cross (this one thrown straight) that got the titlists attention, and it got Martinez to open up, looking to land a little return fire. A moment later, Julio landed an impressive counter-shovel left hook that rocked the challengers legs. It was abundantly clear that Joel Cordova’s

gameplan was to always be first in his attack. The Champ, as talented as he is, routinely throws punches too wide, but was especially apparent in this one.

The third round, Martinez had a nice sequence targeting the body and head, mixing it up. Cordova’s one of those type of fighters you can’t mentally throw them off their game, and lives off of the risks he takes, so he continued to gamble, and surprisingly had pockets of success, as Julio was exhibiting some defensive issues in the moment. All in all, Martinez looked flat compared to his normal outings.

A possible contributor to that, is that they are both friends away from the boxing ring, and as you know, when you go up against friends in any competitive setting, they know what you’re going to do before you even do it, taking away the very element of surprise. With that being said though, he was able to step it up, and have better success in the 4th with his timing, and his ability to string the power punches together as Cordova’s back touched the ropes more due to the force that Julio Cesar was coming with.

Joel Cordova in round 5 kept the aggression going, but he was bludgeoned with a huge Martinez left hook that snapped his head all the way back, and nearly put him down. From that point forward, Martinez began to build on that momentum. Early in the 6th round, everything went to hell for Cordova, as Julio Cesar Martinez blasted him with a

wide sweeping right hand that he didn’t see coming, and he slumped down to the canvas in a serious fit of hurt.

Cordova struggled to get up and beat the count, but he did….but as action ensued, Martinez resembled a

Tazmanian Devil with the level of ferocity, and non-stop combinations he threw, and beat the brave Mexican challenger from pillar to post until the Referee stepped in to stop the fight. Cordova still fought all the way to the end, but the writing on the wall was inevitable by this point. With this 6th round KO, Martinez made the 3rd defense of his WBC title.