) brings many things to the table that became the focal point of his performances, and his presence in the current boxing pantheon. Such components to that

puzzle is his all-around overall skill, natural physical tools, graceful movement, boxing guile, and his flare for the dramatic.

While those have skipped to the front of the line 📌(for good reason) in how they’ve ingratiated themselves to make for his narrative considering the legacy that he has already forged in the sport, the most overlooked component considering the overall package – it is his penchant to always fight the best, when everything is going in his favor, and more impressively …when they aren’t, particularly when he is coming off an injury, and/or less than acceptable circumstances.

For starters…in Loma’s 16 professional fights, he has fought 10 opponents who have won a world title in their careers. Accompanying the mix, he has fought 2 Gold-Medalists as well. Truthfully when you comb through his record, his 2 weakest opponents were Jose Ramirez (in his pro debut), and Romulo Koasicha (in his 6th fight) – and that says a lot, considering that Ramirez and Koasicha were both solid, world ranked fighters who don’t fit the bill as bottom of the barrel.

Lomachenko has crossed paths with four undefeated boxers (them being 🇯🇲Nicolas Walters,

🇨🇺Guillermo Rigondeaux, 🇺🇸Teofimo Lopez, and 🇺🇸Gary Russell Jr.). Speaking of Russell, he will become one of the focal points in the next phase of what’s to be discussed. There have been three spots in Loma’s career where he had to deal with difficult circumstances, yet the narrative never changed. 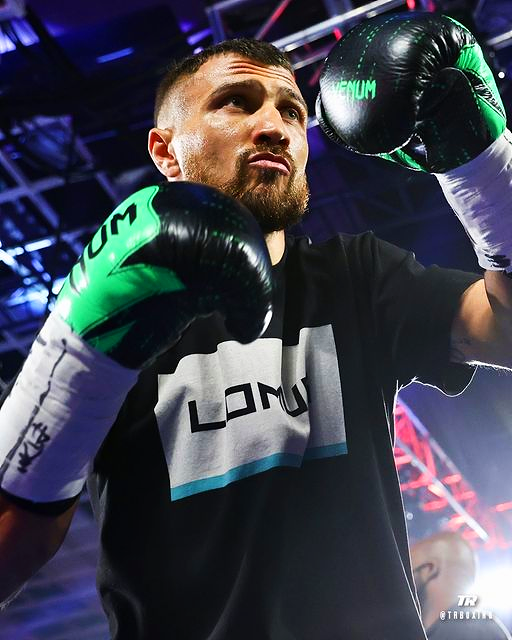 The first example of this was when Vasya ventured forth to try and break the record of becoming the quickest to winning a professional world title in just his second pro fight, when he went up against veteran 🇲🇽Orlando Salido, who flagrantly bended the rules, and even worse, was allowed to by an incompetent third man that accompanied the ring with them. Sadly for what is was worth, neither Salido, nor Laurence Cole faced any retribution for their actions, and Lomachenko fell a bit short on his quest towards hitting the record books.

From this point on, harboring an official

1-1 record, he could have easily pulled the reigns to his ambitions a great deal as his ascension in the sport was in peril of hitting a real snag if he were to lose, or another decision go against his favor. Instead he went completely against the grain, and targeted 🇺🇸Gary Russell Jr., who was unbeaten, and was (still is) the boogeyman of the Featherweight division.

With the vacant WBO Featherweight Title on the line, Loma dominated the supremely skilled American, and tied the record of winning a professional title in his 3rd professional fight (along with 🇹🇭Saensak Muangsurin, the Thai-born fighter who achieved this monumental feat in 1975).

Now, fast-forward to his big fight with 🇻🇪Jorge Linares, whom Lomachenko defeated, but had a difficult time doing so due to him suffering a torn right labrum in the second round of his contest. Following surgery to repair the damage done, he was well within his rights to take up a soft-touch opponent, or a tune-up fight, so that he could work the shoulder out, and put it to the test, to render it qualified so that he can use it full throttle going forward.

Instead, he immediately targeted 🇵🇷Jose Pedraza for a title unification at Lightweight, and considering that Pedraza is a high level technical operator, Vasyl’s desire to go against world class opposition while his shoulders health was in question further supports his notion of “no lackluster opposition” allowed on his pursuit to where he wants to go.

Lastly, the third example is in current time, and is presenting itself as a deja vu moment. Lomachenko is coming off of the exact same right labrum injury, had the same surgery, and as he is coming back to action, once again he opted not to take up a lackluster opponent, and will face 🇯🇵Masayoshi Nakatani. Nakatani may not have won a title (yet) in his profession, but he has proven himself against quality world class opposition in his two opportunities. There are still a few fighters in the sport left that shares Loma’s desire to fight top quality opposition, and not waste any time doing so…but unfortunately, at the top of the bill, there are only a couple ✊🏿✊🏿handful of these operators left if we’re to be perfectly honest. With that being said, whether Vasiliy Lomachenko wins or loses his fight come Saturday night, he should be commended for taking these type of actions, and responsibilities as a risk-taking prizefighter, and we hope to see other current fighters follow his example.