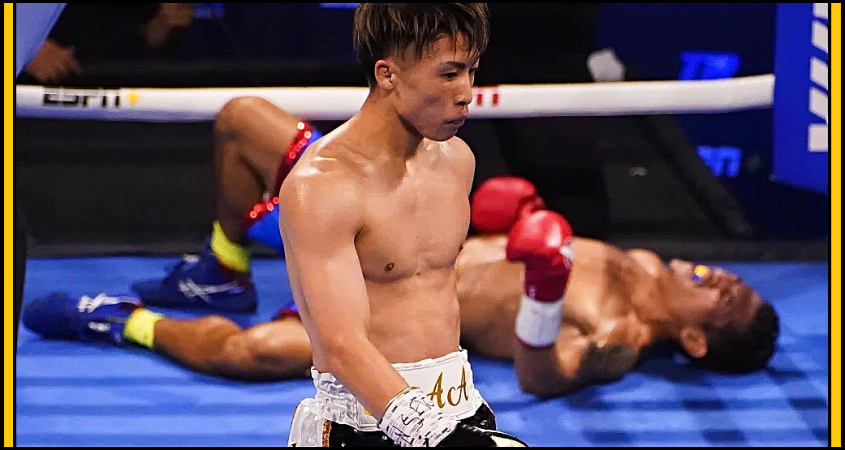 Once again, we all seen the destructive power demonstrated by RING/WBA/IBF Bantamweight King

) like a heat seeking missile that he couldn’t shake, and put him down 3 times in a violent display. The 2nd knockdown audibly sounded like Inoue cracked one of Dasmarinas ribs, and he screamed upon the impact of the punch , as the highlight moment of the fight. With the third round knockout, Inoue made a successful 3rd title defense, and a lasting impression to those who all tuned in to see it.

With any Inoue fight, once it starts, you’re glued to the TV, to make sure that you don’t miss anything, because something can happen at any given time. As the fight started, you could see Dasmarinas game plan, as he immediately went to it. 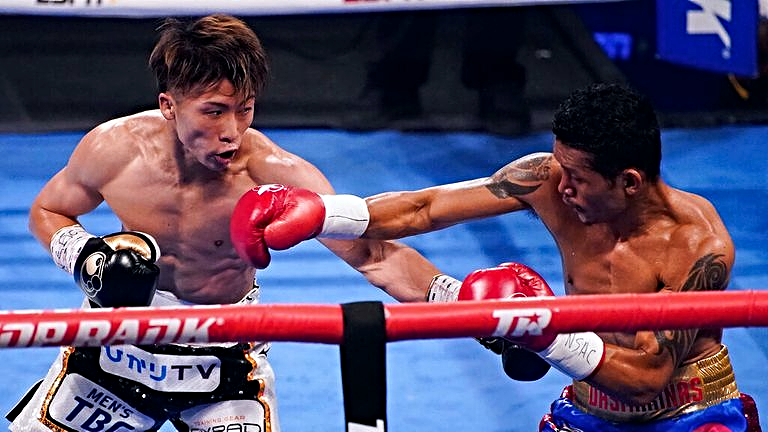 One thing’s for sure, he certainly isn’t a fool, and utilized the ENTIRE ring for the whole first round, as Inoue patiently, stalked him with calculated measure, using the stick, and relying on his properly positioned footwork to get Dasmarinas out of his comfort zone, without opening up his loaded offensive arsenal up, shrinking the ring by cutting it off with discipline, and making his presence felt.

Naoya Inoue started getting closer and closer 🖈(unsure of the size of the ring, but it was a pretty big one), and once Inoue got to his desired range, he mixed it up, firing off check hooks, attacking the body feverishly with a calculated disposition, off-setting Dasmarinas rhythm with his footwork and power jab, and as a result of Inoue committing to his attack, you could see his facial expression change from determination…to worry and confusion, as the heat was becoming a bit too much for “Hot and Spicy” to handle (his nickname). The level of pressure was ablaze, as Inoue unleashed an uppercut that hurt Dasmarinas, proceeding a

left hook to the liver that dropped him down to the canvas for the first knockdown. Michael, in pain got up, and for the remained of the 2nd round, Inoue punished him, and went on the hunt looking to finish him off, but Dasmarinas managed to get to the bell to survive the round.

The third round came, and Naoya Inoue had fully opened up his

toolbox to set him up. You could audibly hear one of Dasmarinas ribs break from a single bone crunching merciless

left hook that put the Filipino down for a second time, and Dasmarinas immediately upon impact, started screaming on his way down to the canvas, spiraling down in a fit of agony. 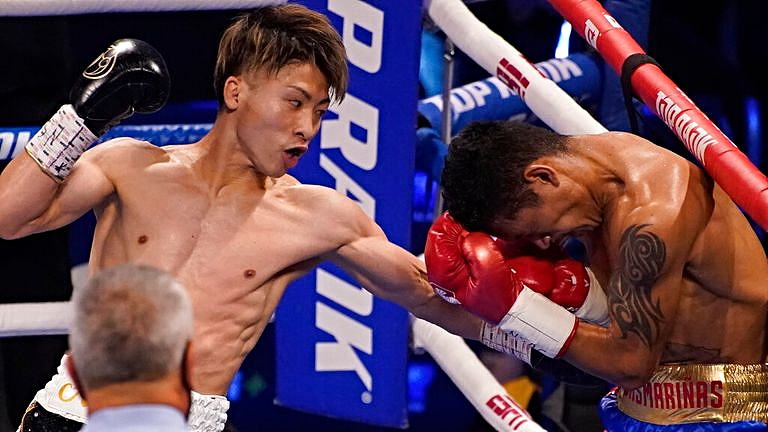 Dasmarinas was game however, and deserves respect for getting up (he did so at the count of 9), looking to tough out the indomitable circumstances. He was cleared by Referee Russell Mora Jr. to continue. Inoue with no remorse went after him, and knowing that he felt the crack of the bones in formation of his fists seconds prior, gave Dasmarinas one more massive left hook to the exact same spot, and finished him off in devastating fashion, demonstrating why he is known to all as “The Monster”, with sheer predatorial instinct.

Power like this is not common at all, it doesn’t matter the weight, and the display of bodypunching is why Inoue is looked at nearly universally as the top body puncher in the sport today. Inoue successfully defended his RING/WBA/IBF World Titles for the third time, as he reigns as the divisions definitive World Champion. What is next for the fearsome little fella? time will tell. It is interesting to note that “idol-turned-to-rival” 🇵🇭Nonito Donaire, and his biggest detractor 🇵🇭John Riel Casimero will meet for a Title Unification bout, for the winner to hold both the WBC, and WBO Titles.

🇨🇺Guillermo Rigondeau. The winner of that 3 man bracket will most likely be targeted by Inoue, for the winner to become Undisputed Bantamweight Champion, as that is a goal that each of them are pursuing.

With that said, Inoue may have to take an in-between fight, as that bracket is going on. Who will that opponent be? it’s far too early to tell, but there is certainly enough talent depth at Bantamweight to keep Inoue engaged, and motivated. I speak for all of us when I say that we can’t wait to see Mr. Inoue back in the office again – that of course being in the boxing ring.