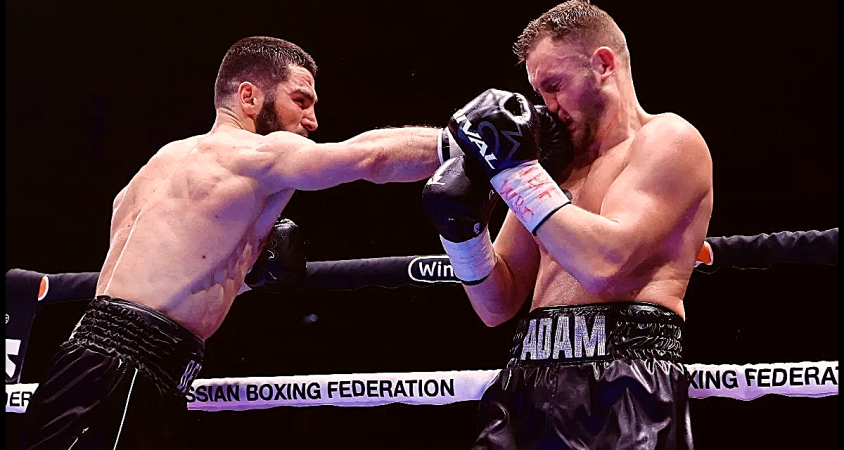 ) was able to keep his knockout streak alive, and defended his WBC, WBO Titles by stopping 🇩🇪Adam Deines (19-2-1, 10KO

) by way of 10th round knockout. The crowd at the

Khodynka Ice Palace gave their native son a warm embrace before and after the figh as he fought for the first time in Russia since turning pro.

It was clear from the start that the southpaw Deines game plan was to counter punch with his right hook and left hand, but due to Beterbiev’s fundamentally sound gloves up-elbows in defense, he was able to pick off and evade most of them on his own pursuit into Deines wheel-barrow.

In the closing seconds of the first round, Beterbiev effortlessly landed the iron behind a power left to put Adam on the canvas. Deines got up, and went back to his corner. Round 2, Deines peppering with the jab was pretty successful, as he was looking to regain control of the combat.

Beterbiev’s strong right hand became a factor by round 3, and you started to see the physical signs of damage from those shots landed. To Deines credit, you can tell he came to fight, and he showed some pretty nifty maneuvers in the ring, occasionally sneaking a pop-shot right hand in there, and was doing a decent job of slipping punches with his head and foot movement.

Deines found himself in a bit of trouble, with Artur taking away all of the real-estate, and calmly ripped in multiple combinations while Deines back was to the ropes, catching him with a couple of beautiful uppercuts that made the challenger a little happy-footed.

ramped it up to the dominant pressure that he had used against 🇺🇦Oleksandr Gvozdyk in the second half of their Championship bout, and Deines was overwhelmed with the onslaught. Power shot after power shot in combination, a big left hook caused a welt to form on Deines right temple. Deines would get out of the round, but this one that you could conceivable score of

10-8 due to the sheer dominance of the Russian fighter that he inflicted in the stanza.

For the next few rounds, Artur put forth a workmanlike performance, wearing the game challenger down. Round 10, the accumulation of punishment was mounting, and the vulnerable Deines was

left hook that put Deines down to the canvas for a second time. Deines got up wobbly, and his corner understood the magnitude of their fighters health, and waived the white towel (it was actually blue, found that to be humorous), and just like that, Beterbiev got his 16th knockout in as many fights.

Beterbiev was able to shake off the rust after a lengthy layoff, and got a sense of what his body could do post his Covid diagnosis a while back. He made the 4th defense of his title, and now he will wait. Elsewhere in the division, 🇺🇸Joe Smith Jr. and 🇷🇺Maxim Vlasov are set to fight for the vacant WBO Light-Heavyweight Title.

With expectations leaning towards Smith Jr. winning the belt, people are salivating at the potential prospects of two of the ten hardest punchers in boxing fighting in a massive unification fight, so that would be something to look forward to, but of course, first things first, the people’s Champion Smith will have to take care of his assignment before we can even get to there.