What an explosive finish to a fight that we all anticipated, and manifested as such. A showcase of true Mexican warriors, it was

) that won the war of attrition over

) by a 10th round knockout of savagery, to become the brand new 🟢WBC Super-Featherweight World Titlist, ending Berchelt’s entertaining 6 defense title reign.  As Valdez put forth by far the greatest performance of his career, Berchelt’s health became the focal point, as he was rendered to the canvas in seemingly dire straits.

A FIGHT – TO BE REMEMBERED IN TIME

Berchelt decided to open up the fight on his backfoot, sticking the jab out, while the smaller Valdez came forward, looking to find his range, though overzealous in trying to 🔩corkscrew his roundhouse right hand. Berchelt’s relaxed nature was apparent in his non-wasteful movement, while Oscar fought tight, bringing forth my concern for his ⛽stamina reserve for the back-end of the fight if it were to get there.

As time went on, Valdez branched out to assume the role as the boxer, as he has better pedigree in that role, while Berchelt went back to his normal come forward approach, though the interesting difference at this point that Berchelt being one of the busiest fighters in boxing when it comes to letting his hands go, didn’t 📉throw much – an indicator that he respected the power of the challenger.

Valdez had an impressive 3rd round, shifting, pop-shotting, turning Berchelt and picking away at the openings. Valdez even had an impressive defensive sequence to get his back off the ropes and away from the incoming 🚦traffic, which is something I thought I would never say.

Valdez was openly looking to land the lead left hook on the inside of Berchelt’s 🥊right glove, which was a little too far back in his positioning, exposing his chin to be found if Oscar could get to the target.  A big one got through and wobbled the Champion badly.  With Berchelt doing the one man salsa with his leg coordination failing on him, Valdez bludgeoned him throughout the rest of the round, hurting him further with a big uppercut.

At the end of the round, the ropes was the only thing that held Berchelt up from going down, so Referee 🕴🏻Russell Mora counted it accurately as a knockdown.  Barely being able to stand up, Mora gave him a break to continue, and luckily for Berchelt, the bell sounded immediately as he got back to action.

The 5th round, Berchelt didn’t look like he recovered at all, and labored around the ring while Oscar kept his foot on the 🏎️gas pedal, sensing wounded prey in front of him.  Berchelt, mixing back up his attack in the 6th round, momentarily hurt Valdez to the body with both a left hook, and a right hook.  By this point, the fight we expected had broken out. The stamina concern I had for Valdez started to showing the 7th round, when he began winging the widest of punches, losing coordination, and stumbling away from Berchelt’s power, as Miguel began to let his hands go from his deep reservoir of a gas tank.  The end of the 7th round was 💣💣bombs away, with both prideful warriors dishing out what was being taken.

While Oscar withered the round before, by round 8, he rebounded heavily and got back to what worked earlier in the fight, doing a beautiful job of sticking, moving, turning, and resetting.  The left hook played a big role in the 9th, and Oscar landed a big one to clip Berchelt, as well as an uppercut to knock him on his back for the knockdown.  Berchelt got up, but he got up hurt.  Valdez decided to remain calculated instead of rushing in, looking to string together meaningful punches, and Berchelt felt the sting of them all the way up to the 🛎️bell.

Valdez continued to shine, and his confidence went up, even started to string together 4, 5 punch combinations.  Valdez constantly switched stances throughout the fight, especially by the ropes to get the right leverage on his shots, and having the right foot position to get himself out of trouble.  At the end of the round, Valdez landed a disgusting 💥left hook that temporarily knocked Miguel Berchelt unconscious. 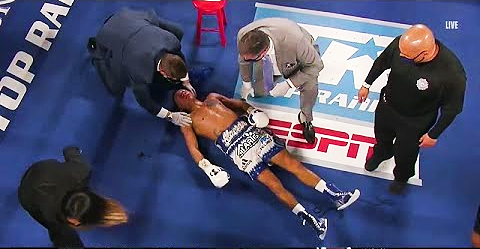 In complete celebration, Oscar Valdez became the brand new 🟢WBC Super-Featherweight Champion!.  The shock of the moment quickly became worry as Berchelt was down for two minutes without moving, but he regained consciousness, and was tended to by medical personnel.  For precautionary reasons, Berchelt was taken to a local 🏥Medical Center, which is news we will keep an eye on.

It is hard to transition from a moment like that, but Oscar Valdez throughout the entire night, just put up by far the greatest performance of his entire career, and has now TRULY arrived on the major scene as a top-flight boxer, not just one with great promise.  As for Head-Trainer 🥋Eddy Reynoso… he does it again!.  What an incredible trainer he has, as he once again was successful in 📈rapidly expediting his fighters learning curve, to get him ready for an assignment that in recent past, his pupil was nowhere near ready to be assigned, with his fighters flourishing greatly once the time came to show what was learned through Training camps.  As much of a career night that this was, this should also hold the same weight for Mr. Eddy Reynoso…an incredible performance orchestrated by the new(er) duo…a Championship duo now.