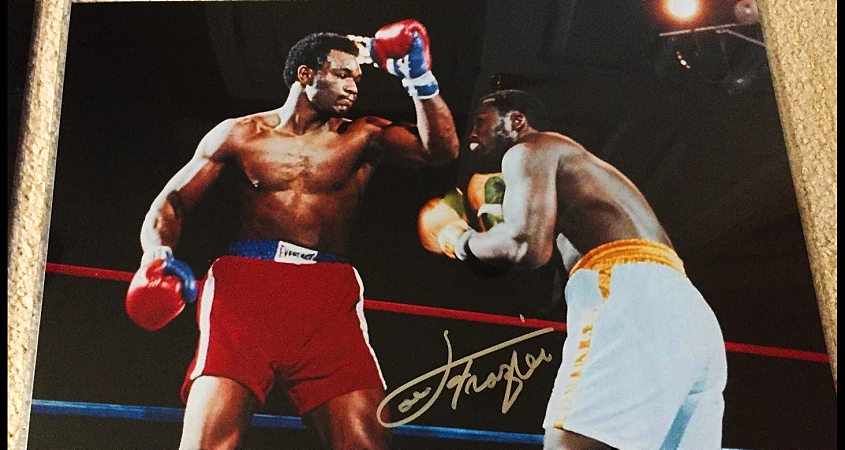 Muhammad Ali his 1st defeat and putting to rest who the man was in the division.

George Foreman (37-0-0, 34KO), who was making his first attempt at the big time, and damn did he deliver that day, frightening the boxing world and destroying one of it’s truly great Champions.

The irony behind it all was that George Foreman had idolized Frazier, and actually feared him…..but watching this fight, you would never know it.  After an intense staredown, they both immediately went to work in closed quarters, and Joe was looking to start 💨smokin’ and establish his big left hook.

George, to deal with the relentless pressure attack of Frazier, used his superior physical strength to repeatedly push him outside, with both hands, constantly forcing Joe to have to reset and start from scratch trying to get inside, which was the only range where he could have conceivably did any damage.

Joe got up, but as he got back to action, you could see he was in big trouble, flailing his shots, blindly missing the 🎯target, an indicator that his cognition was impaired.  George relentlessly banged up as Joe was on trouble, stuck with no other other option but to bob and weave on the ropes to evade trouble.

It was then that Foreman detonated a bomb in the form of an uppercut that short-circuited Joe, and had him slump back down to the mat in a devastating, 🖼️picture-perfect moment.

Joe somehow managed to get on his feet, but he was wobbling profusely and facing the 💫wrong direction, indicating that he didn’t really know where he was.  He was allowed to continue, and still feeling the effects of the second knockdown, went down a third time in the 1st round from a sweeping left hook.

Somehow Frazier was able to get out of the opening stanza, but the magnitude of damage that occurred already resonated through the 🏟️Jamaica crowd.  Frazier, who was leery in the corner, regrouped himself as much as he could for the second.

For those who wondered if the first round was merely stroke of luck for George, he immediately went back to work, and pummeled the gutsy Champion with both fists.  The most embarrassing moment for Joe was being overwhelmed by the barrage of sledgehammers, turning his back, doing a getty-up dance, and getting dropped to the canvas for the 4th time.

The game Frazier kept getting up, but as Referee 🕴️Arthur Mercante Sr. allowed him to return back to action, big George immediately scraped Joe with a 💥nasty uppercut, then a left hook to spring him off the canvas again.  This was the 5th time that Frazier had been down in just 4 minutes of action.

By this time, legendary Head Trainer 🥋Angelo Dundee (Muhammad Ali’s Trainer), who was sitting by ringside… you could feintly, but audibly hear screaming “stop the fight!” as his cries for Frazier’s health was drowned out by the crowd, who collectively could not believe what they were seeing.

Dundee kept screaming as Joe got back up and was back in the action, while a growing chorus around the arena shared the same sentiment, hoping to see the punishment stopped.  George pulverized Joe some more until he worked him down to the mat for the sixth time in two rounds by attrition.  Frazier, who possessed that never-give-up attitude, got up like the true warrior he was, but by this time, Arthur Mercante had seen enough, and there, a new

World Champion was crowned at the age of 23, and his name was George Foreman.

FRAZIER VS. FOREMAN 1   (THE FULL FIGHT)