Onlookers from the 🏟️OTA-City General Gymnasium in Tokyo, 🗾Japan was witness to a master performance authored up by Japanese boxing legend

), who retained his WBO Super-Flyweight Title after breaking down former unbeaten foe

), putting him down twice, and knocking him out on his feet midway through the 8th round to secure the crowning victory of his Hall-of-Fame bound career. 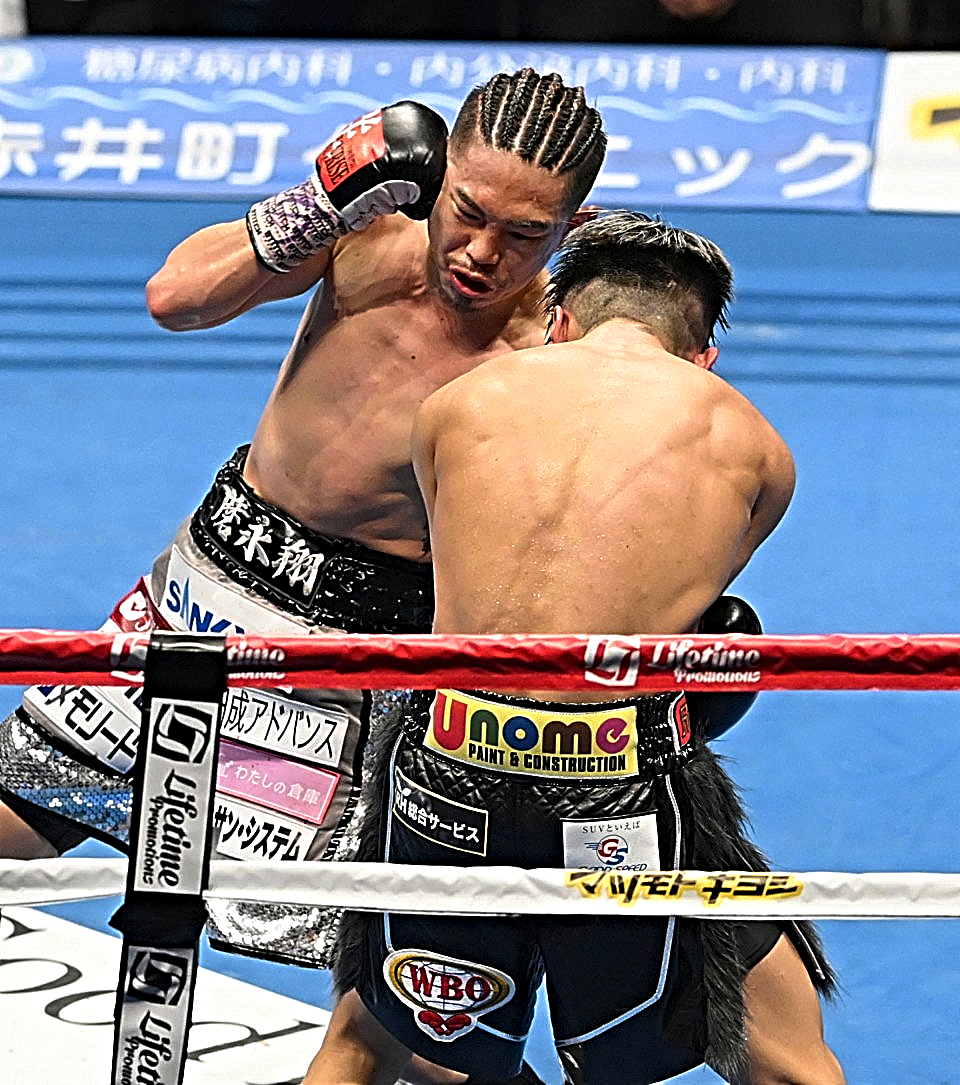 First and foremost, what I will say coming into this fight was that both Ioka and Tanaka came in the best 🏋️shape that I’ve ever seen both of them in, so I expected a war of attribution to break out, and we got some of that.  Tanaka came straight out the corner with a strong 1-2 combination – something that seldom works on Ioka, but landed both flush on the chin.

What was odd to me from the start was that Kosei Tanaka took on the role as the aggressor, while Kazuto Ioka would be the one in counterpunching mode, studying his opponent off the back foot.  Ioka always had the ability to do so, but for Tanaka, the best 🧠tactic he could’ve used coming in this fight was to stick and move, to take advantage of Ioka’s flat footed stance.

Kosei got the jab working well from mid-distance, while Ioka was masterfully stringing together mixed combinations to the head and body, of multiple punch variety.  They began to trade punches in the middle of the second round, as they got comfortable sitting behind their own abilities.

Early it looked like Kazuto had the beat down on his ⌚timing on the younger fighter, while Kosei was making a mistake he is prone to making (his only true flaw) that he doesn’t assess range of distance well enough to stick to his advantages, whether it be outside, or inside, according to the opponent, so staying right in the wheelhouse for the Champion to get comfortable without having to chase him around. 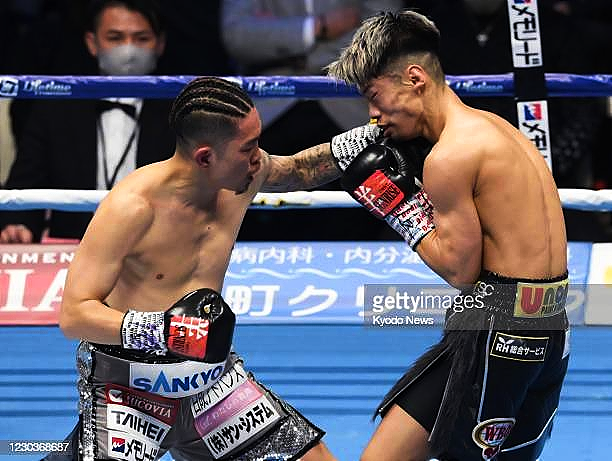 Kosei began to change his eye level, and started to touch Ioka downstairs with the right hand.  Kazuto got his left hook to the body, and head combination working, showing the subtle skills that aided him as a Champion for a long time – that is 9 years and running.  Whatever Ioka was bringing to the table, Tanaka was dishing out as well with clever work upstairs.

The ebb and flow in the third round was sharp back and forth, with both fighters refusing to budge an inch.  Kosei finished the better of the two down the stretch of the third round.  Ioka’s best punch thus far was when he baited Tanaka with a fake jab to the body, getting him to drop his guard, then firing a stiff right hand to the jaw that certainly got his attention.

Tanaka opened up the full offense on Ioka in the latter part of the 4th.  Though most of them were picked off by the arms, the 🥊🥊volume did appear to bother Ioka particularly on the ropes, but he was never pushed to panic mode there, instead keeping behind his composure and continuing to operate.

A right hand at the end of the 4th from Kazuto 🩸bloodied the nose of Tanaka, as Ioka was slowly starting to gathering his footing to enforce his positioning in the fight, playing the mental game and letting Kosei know that there was a lot more that he needed to get done to get him out of there.

Ioka’s 👁️left eye began to swell shut as well from the action administered in the first 4 rounds.  The middle rounds crept up on us swiftly.  Tanaka threw a lot in the 5th round, but Ioka did a marvelous job of evading and slipping most of his combinations, while calmly looking for opportunities to place his punches, relying on his elite ability to view opportunities.

The surveying paid off big, as Ioka landed a 2-3 (cross, hook) punch combination that sent Kosei Tanaka corkscrewing down to the canvas in a shocking moment😯.  He got up, and made it out of the 🛎️5th round – certainly the punctuation Ioka wanted to ensure that the round was his, and then some. 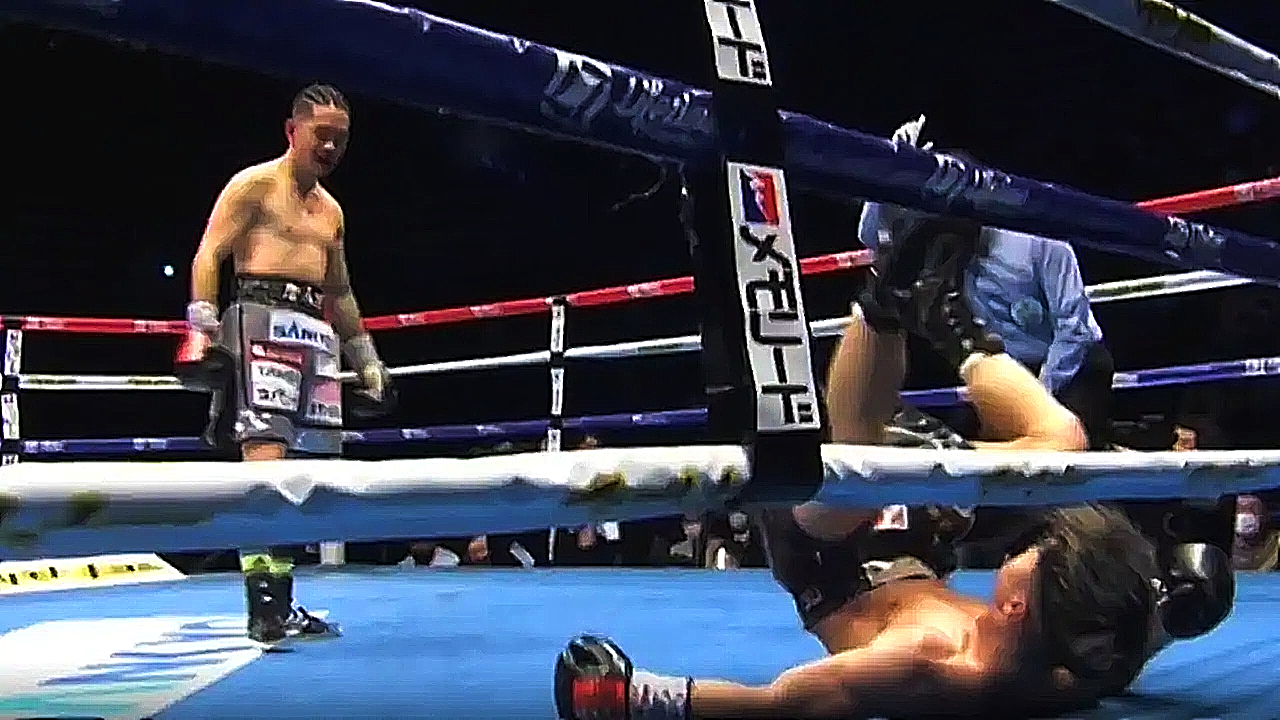 In the 6th round, this was probably the most confident I’ve ever seen Kazuto, heavily digging in on the front foot, and rooting his positioning to showcase mental dominance in saying that I will control the center of this ring.  Kazuto Ioka by this point also started to piece together cross and hook combinations, while Kosei appeared a little jittery after feeling the full brunt of his punching power the round prior.

Kosei Tanaka did comport himself well to get back in the middle of the 6th round, but once again, 💭the point about him not choosing his distances wisely was on display again, as he was looking now to muscle Ioka on the inside, to try to work the body instead of sticking from the outside.

Kazuto Ioka made him pay, and put him down a second time with a 💥brutal left hook in that 6th round, and wow was it a perfect shot.  Kosei got up, and bravely fought back, while appearing to be in bad condition following the knockdown, and Ioka looked every bit as comfortable as you could be.

The 7th was fought heavily in closed quarters, with Ioka completely digging down to muster 💯% power behind his shots, while Tanaka was cleverly looking to slither to dig to the ribs, and sneak in some right hands over the top.  Tanaka was doing his best work in the seventh, since about the 3rd.

Both boxers battered and bruised up, Kosei Tanaka showed his braveness early with some clever inside combination work, scoring well in those instances…..but his bravery ultimately became his undoing in this stanza, as Kazuto caught him with a 💣devastating left hook.  Assigned Referee 🕴️Michael Someya did a fantastic job immediately stepping in to stop the fight, as the game Kosei Tanaka was literally out on his feet from that brutal shot, and much more damage would have come his way if Mr. Someya didn’t step in immediately the way he did.

A beautiful shot ended the night for the great Kosei Tanaka, who would suffer his lone defeat as a professional, and the great, crafty skilled veteran Kazuto Ioka would achieve his greatest moment as a professional, at the age of 31, and clearing a P4P level boxer, to make the 2nd defense of his WBO Super-Flyweight Title, winning his 18th World Title fight.

THE ROLLOUT KAZUTO IOKA’S STANDOUT VICTORY, AND WHAT HE WANTS NEXT

Kosei Tanaka was confident that a true 🔥“passing of the torch” moment was here, and that youth would serve on his side in the seat of battle, but tonight wasn’t the night, as Ioka had other plans, and ensured to his younger compatriot that the smarter fighter is the more dangerous one inside of the ring.

A very good tactical fight it was between two great fighters, but unfortunately when risks are taken at the top level, most of the time, one has to fall, and that was the case for Tanaka, administered by the heavy hands of Mr. Kazuto Ioka.  He will now surely have his eyes fixated on the winner between thee Super-Flyweight Champion of the World 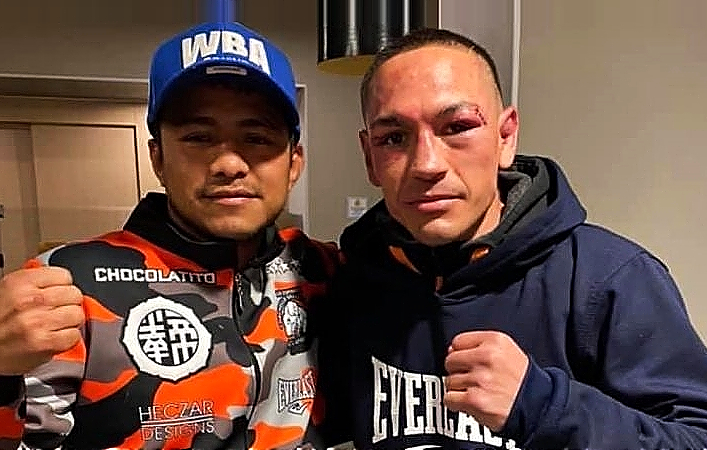 For Ioka, that would ensure 4 of the 5 World Title belts would on the line from the ⚖️115 lb. division, and he is exactly where he wants to be at this stage of his career when it comes to the biggest opportunities possible to further push his greatness forward.  When discussing legendary lower-weight boxers in history, he certainly 🔝ranks well, and he has proven to be one of the greatest Japanese pugilists of all time to grace the ring.