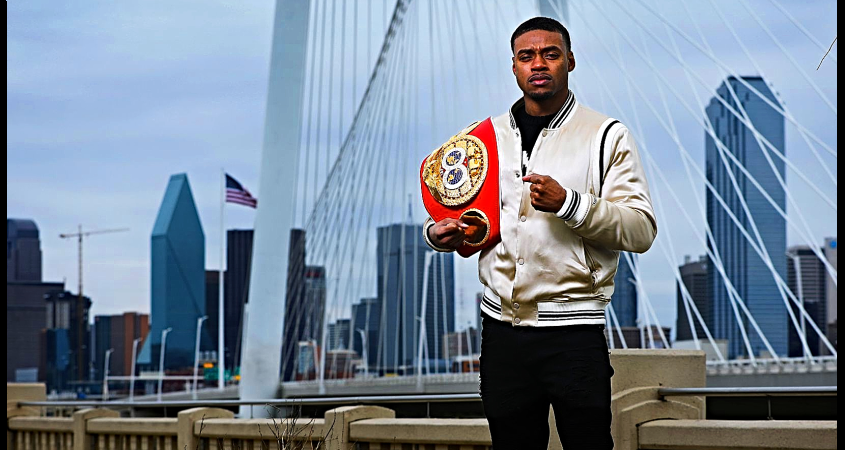 rollercoaster ride it has been for

Errol Spence (the Dallas native in the last 15 months).  Riding high last year off of his September 28th hard-earned victory over

Shawn Porter, Errol was sitting on

top of the world, that is until his world came crashing down, in both a figurative, and literal sense.

On a fateful Friday night on October 11th, 2019 (technically Saturday morning, but it’s carry-over of the night before), Errol after making the ill-fated decision to drive home right after downing a few drinks, was nearly a fatal one, as he crashed his Ferrari, flipping over at high velocity at least 3 times.

The crash was caught on nearby

surveillance camera, and the optics of the crash itself was every bit as gruesome as was originally reported.  The feeling around the boxing world was universal sorrow as many did not believe that Errol would survive the ordeal, echoing haunting memories of the crash that took

Salvador Sanchez life back in 1982.  Taken to a local Dallas hospital, some miraculous news came out that Errol, despite the flips and damage to the car, had zero bones broken – how? we’ll just leave that one up to interpretation.

Errol did mess up his grill, and later had to have surgery for his teeth, but the initial damage done was that he did not remember being in the crash, didn’t remember the

night at all, and he certainly did not remember the people who had came to visit him while he was in the Intensive Care Unit.

Despite onset amnesia, he had regained his cognizance, and rediscovered a new lease on life, as his was ultimately spared.  He took the lesson in stride and re-evaluated his standing as a man, as a fighter, and most importantly, as a loving father.

He took responsibility for his actions, and had re-dedicated himself all across the board. Being the naturally gutsy individual that he is, he not only decided to jump back in the ring, but he skipped a tune-up opportunity all together to fight dangerous contender

Danny Garcia, all while Errol’s physical and mental conditioning still had questions lingering for himself, and to the media pertaining to his accident.

Errol is notorious for living a hard life, and taking on serious 🎲🎲gambles.  Much of that was why he got into that accident in the first place, but once you can rewire that innate desire to take chances, and use it with positive connotation, the rewards can fully reflect the steps it took to get there.

Errol met Garcia head-on, and looked every bit the fighter that we have all grown accustomed to witnessing over these past 7 years as a professional, and at no point in the fight did he ever 🐚shell up, or shy away from the action.

ERROL SPENCE & HIS TRUTH – STANDING TALL IN TRAGEDIES AND TRIUMPH

Errol faced and fought his demons head-on (Garcia not being the demon of course), and defeated his obstacles, doing so ever so boldly, and it showed throughout his fight with Danny.  The judging was credible, and by way of

Unanimous Decision, Errol Spence walked away as the victor, and retained his two Welterweight belts, but the major story here was that in a risky proposition to immediately fight someone of Danny Garcia’s caliber, “The Truth” shined, and he convinced watchers that he is indeed the same fighter, but a different man…a smarter man, who now looks to weaponize his will, desire and grit to work beneficially in his favor, as a fighter, as a man, as a father, and as an ambassador for his supporters.