A tale of two halves – is what instantly comes to mind in regards to this contest that featured 12 highly tactical skillful rounds.  The three judges went on to favor the younger fighter, as

Teofimo “Takeover” Lopez (16-0-0, 12KO👊) lives up to the meaning of his nickname, now in possession of all RING/WBA/WBO/IBF/WBC “Franchise” Lightweight World Title Belts in what is a scenario where he is now living the pinnacle of his dream in live time.

Vasiliy “Loma” Lomachenko (14-2-0👊) was immediately disgusted by the unnecessarily wide scorecards, with a legitimate beef in that regard, however he shared later that he would have to watch the fight to see whether he believed he did enough to win, or to get a tie, indicating that he felt that the fight was close.

THE DETAILS ON THE FIGHT BREAKDOWN

Lomachenko started the fight out keeping his 🃏cards close to his chest, not offering up much and looking to heavily study the younger opponent.  Lopez looked to work the jab, and landed a couple of decent body punches to take the first round formally, probing and touching with the jab upstairs and downstairs as Loma was inactive while studying Lopez.

Teofimo also got in a couple of decent right hands over the top in the second round as Loma’s back was towards the ropes in a positive sequence for him.  Loma finally opened up halfway through the second round and landed a couple of lightning quick crosses of his own, and a good right hook.

Lopez best success early on throughout the first 3 rounds was to the body.  Lomachenko began to ramp up the movement, changing angles and eye level, while sprinkling in some leads and counter shots over the top.  Teofimo Lopez showcased impressive 🧠ring IQ, mixing it up, and forcing Lomachenko to constantly readjust.  Lopez natural counterpunch acumen was nullifying the activity from the Ukranian fighter in the 4th round, as this had become a common theme throughout. 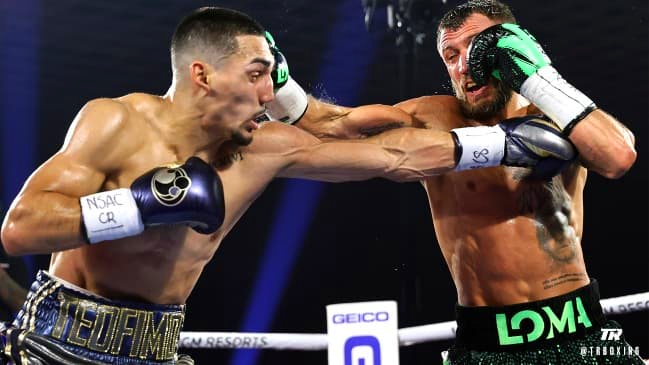 Papachenko (Anatoliy Lomachenko) constantly preached to his son to remain patient, but Vasiliy was way TOO patient, taking the advice way too literal to where he was rendered stagnant both by his gameplan, and from the threat of Lopez and the counter ability.  With that said, You cannot drown someone when they sit in a 🛥️comfortable boat, indicating that the lack of pressure put forth didn’t contribute to anything positive early.  By the 5th, the fight took on much more of a counter punching, cautious showing with both boxers searching and analyzing for any opportunities and openings to fire away.

In mid-round, Lomachenko landed a beautiful right hook upstairs, and Lopez continued his crafty work to the body.  The 6th round, Teofimo had a successful finish with a very well placed counter 💪🏼uppercut, and right hand combination.  Halfway through the fight, Teofimo had a heavy edge in success, evidenced by the ring generalship and connect rate.  From here, Lomachenko found himself in a hole and knew he had to diversify, and shift his gameplan to second phase.

In the 6th round, the tide of the action had changed with Lomachenko feeling a sense of urgency and coming forward while Teofimo fought off the backfoot – serving as a role reversal of tactics.  A heavy clash of heads happened in the 7th accidentally as a result of heightened activity from both combatants.  Round 8 we finally got the 💣explosion that we’ve grown accustomed o seeing from Loma, throwing caution to the wind and landing multiple combinations on Teofimo inside, and actively letting his hands go in a clinch.

Teo landed a couple pop shots, but Lomachenko shifted the climate of the fight.  Much of the same ensued in the 9th round.  Teo was deadset in landing the uppercut, but often missed the target, however he split the guard well with one of them, well thrown and 🎯getting to the chin.  Lomachenko landed multiple combinations while probing heavily on the front foot and operating in a dangerous position, just barely slipping and weaving counter hooks and uppercuts.

Lomachenko had an offensive explosion in the 10th round as Teofimo’s hands dropped, perhaps some signs of fatigue setting in.  His activity rate started to 📉dip as he was trying to adjust to Lomachenko’s onslaught.  Vasya came out like gangbusters in the 11th round, authoring up by far his best round, and causing swelling to occur over Lopez left eye. 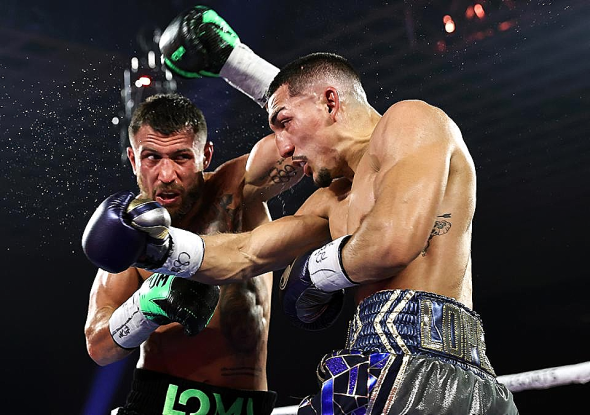 Though it was clear that Lomachenko worked himself back into the fight, it did not discourage Lopez, as he kept his composure under tact, and wanted to put all the 🎰chips out on the table for the final stanza, and climax of this contest.  The 12th round was gut check time, and boy did they deliver down the stretch.  Teofimo had a strong showing in the first half of the stanza, but Lomachenko worked his way back into the round.  Teofimo though in my estimation had a better grasp of the combat throughout the full ⏰3 minute round.

An accidental clash of heads caused a 🩸nasty gash over Teofimo’s right eye right at the 10-second clapper, but for whatever reason, veteran Referee 🕴️Russell Mora Jr. called time to have doctors take a look at the cut.  Of course he let it ride, and the two combatants fought hard to the bell.

The feel from many was that this was a tight contest, with tension in the air as to how the scorecards would read…well…until those scorecards were actually read.  The scorecards did not reflect the competitive nature of the fight, yielding extremely wide results, pathetic if-you-will, as you want the scores to mirror the action that took place, with Teofimo Lopez heavily in control in the first half, and Vasiliy Lomachenko rampaging his way through the second half.

With the scores known, one could sense which way it was going to go, and Teofimo Lopez had his dream realized – a jubilant moment upon being announced that he is now the newly crowned

RING/WBA/WBO/IBF/WBC “Franchise” UNDISPUTED Lightweight Champion of the World.  He fought a beautiful fight predicated on timing, counterpunching, and attacking the body, and from this vantage point, he now has the world at his finger tips as he can now call all the shots. BEEN A LONG TIME FOR LIGHTWEIGHTS

🥇🇺🇸Pernell “Sweet Pea” Whitaker (WBC/IBF Champ at the time) achieved this feat 29 years ago back in 1991 when he knocked 🇵🇷Juan Navarro (WBA titlist) out in the 1st round in devastating fashion by a right hand.

He also successfully became the sports

10th Undisputed male Lightweight World Champion since the sport of boxing’s shift in splitting the World title into 2 sanctioning bodies back in 1963 (WBA/WBC), and is also boxing’s 43 Undisputed Lightweight (as well as the when you incorporate the history of “World Champions” dating all the way back to 1886). Teofimo is also the first to achieve this within the 4-belt title era – an extra 🪶feather in the 🎩hat for the gifted Hondurian Brooklyn native for his accomplishment given the difficulty today with boxing’s politics to unify all major world titles.

THE OPTIONS FOR LOMA GOING FORWARD

Vasiliy Lomachenko was disappointed in the outcome of the fight in terms of the way the judges scored it.  Now what could he do going forward? he can try and vie for a re-match against

Teofimo Lopez for one more opportunity for Undisputed Champion if Teofimo is game to running it back.  Vasya can also bounce back to his best division where he is at his most optimal, which is Super-Featherweight, and opt to target other big names like the winner between 🇺🇸Gervonta “Tank” Davis, and 🇲🇽Leo Santa Cruz for the WBA Super-Featherweight Title.

Powerpunching WBC Titlist 🇲🇽Miguel Berchelt also continues to loom at Super-Featherweight, as well as new addition to the weight class 🥈🇺🇸Shakur Stevenson, so upon if Loma gravitates back to his natural weight, he certainly has options to pursue in terms of getting back into the title picture.

WHERE DOES TEOFIMO GO FROM HERE?

With Lopez literally reaching the pinnacle of it all, it will be interesting what he wants to do now.  Prior to this fight, there were whispers coming about surrounding his camp that Teofimo 📍(whether he won or lost this fight) would vacate the Lightweight division to venture north to Junior-Welterweight, which assessing by his bodyframe will be a far more comfortable fit at this juncture of his young career.  He is young at 23 years of age, and obviously talented enough surely to make a push towards the top talent at 140.

Considering the way this fight went, I wonder if he is open for giving a re-match to

Vasiliy Lomachenko, and if so, hopefully we can find ourselves in a better place given the state of the covid pandemic so that we can if not pack 🏟️arenas again to get the electric atmosphere to enhance the experience of the fight, then to get enough fans to attend so that their voices can be heard – we can all hope for that, as well as seeing these two boxers run it back for a re-match.

Teofimo Lopez has a very bright future in this sport, and can take this victory as a learning experience to further tighten his craft moreso than it is now, which could be scary for the rest of boxing at neighboring weights.  Now back to a possible move-up…certainly when you look at the top dogs at 140 lbs. in

🏴󠁧󠁢󠁳󠁣󠁴󠁿Josh Taylor (RING/WBA/IBF), 🇺🇸Jose Carlos Ramirez (WBC/WBO), 🇺🇸Regis Prograis, and even a potential move up in weight by 🇺🇸Devin Haney, Teofimo’s own talent certainly stacks up VERY well in the Junior-Welterweight division if he is indeed contemplating a new landscape to try and conquer, expounding upon the “Takeover” moniker.  Regardless on how you had this fight scored, one thing is for sure…..and that is that a brand new superstar is born, with high selling potential. 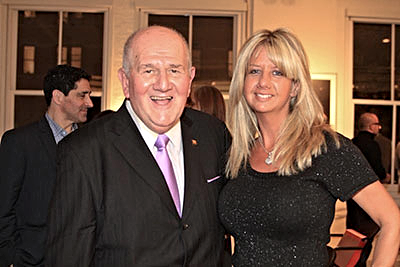 📌As you can see, veteran Judge 📝Julie Lederman should be ashamed of herself.  I am 100% in agreement with Top-Rank promoter 🕴️Bob Arum and his assessment that he would like to never see her as a judge ever again.  📝Steve Weisfeld’s scoring was suspect as well.  Now 📝Tim Cheatham was the only judge tonight who had SOME credence to his scoring, but in highlighting the other 2 awful cards, it dampened the overall tactical excellence in the fight from both boxers that we witnessed, and once again put boxing’s corruption back in the spotlight by rearing its head of its past demons.

One thought on “The Takeover Has Officially Begun – Teofimo Lopez Lives Out His Dream, Becomes Undisputed Lightweight Champion of the World”