🥇🥇🇺🇦Vasiliy “Loma” Lomachenko (14-1-0, 10KO), and 🇺🇸Teofimo “Takeover” Lopez (15-0-0, 12KO) unification bout for Lightweight supremacy.  This contest has drawn interest from the boxing contingent as being the first huge bout (on the men’s side of the sport) since the pandemic hit, so the thirst surrounding the event is coupled with its natural implications of being a big fight featuring a young, talented, hungry 🦁lion in Lopez, and a supremely skilled, driven walking accomplishment, such as Lomachenko.

Teofimo will enter this contest with the IBF Lightweight title, while Lomachenko will bring with him the ♛RING, WBA, WBC (Franchise), WBO Lightweight Titles, so what we have here is a melting pot of wealth, as the winner will be draped with more belts than his body will figuratively allow him to.  We have a big fight here, so let’s delve into the details and rationalize who I will pick for winning this contest, and why. 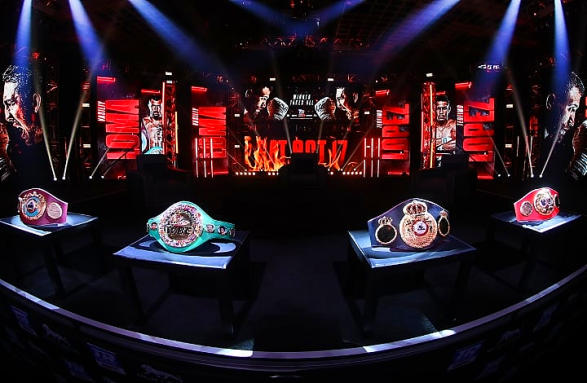 VASILIY LOMACHENKO’S BREAKDOWN OF HIS SKILLS AND VULNERABILITIES

Now, examining the Ukrainian, and nitpicking his abilities, does Lomachenko have any discernible weaknesses❓ no – he actually does not have one, but there are still some areas in which he needs to be careful given the explosiveness of his opponent.  What do you do as an opponent when you come across a well-rounded boxer void of any deficiencies? Well the best answer is that you try to confuse him.

You want to play mind games so you can set them up for something that isn’t coming, bait them in, to try and catch them off guard with your plan of attack.  With that being said, Teofimo is a good boxer, but at this juncture of his career, he isn’t quite sophisticated enough yet 🧠between the ears to where he can play that cat-and-mouse version of chess.

What could be the case though is that since Teofimo is not a one-dimensional boxer, perhaps his perception of his all-go prowling nature can throw Lomachenko off-basis, or off-rhythm in a sequence.  Now historically when analyzing his career in the amateurs and the pros, Loma has never been susceptible to that, most notably due to the teachings of his Father/Trainer 🗣️

Anatoly Lomachenko (PapaCHENKO), and his sons ability to read & react to a wide variation of different situations and to pick up on a variety of punches. 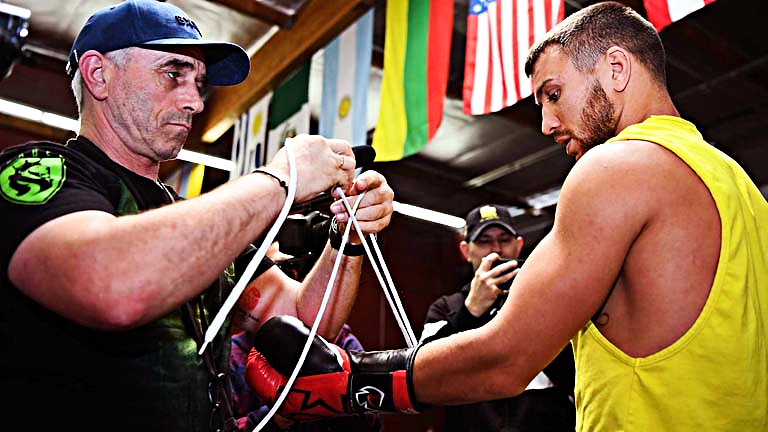 One thing I am interested in however is that Vasiliy will be fighting against something rather new to him. I don’t ever recall him fighting against someone who utilized the shell defense, so at least, he will be looking at something different than he is normally accustomed to seeing.  Loma though happens to be a master at reading and adapting to situations that present itself, but being that it takes a couple rounds for him to figure a new style out, it makes Lopez that much more dangerous early in the fight for those couple rounds.

Lomachenko has showcased in his 417 combined amateur, WSB & professional fights to have a quality chin, with him only going down twice in those 417 fights (once in the amateurs, and once against

🇻🇪Jorge Linares), but more-so categorically on the side of a flash, or a quick knockdowns.  Lomachenko was able to get up before he count of 1 despite walking into a right hand from Linares, which doubled the power and the impact of the punch itself.

Vasiliy was buzzed a little bit against 🥇🇬🇧Luke Campbell as well, but he quickly regrouped, and got right back to business, returning the favor right back to Campbell in abundance. While he has an excellent chin, he can’t get bored, or fall asleep, because he could 💤go to sleep against Lopez, who packs an inordinate amount of power in both fists, and Lomachenko fully understands that.  Since the Linares fight, Loma indicated that he learned one more boxing lesson regarding that fight about having a periodic lapse, and he hasn’t fallen asleep at the wheel since, so it will be incumbent upon him to work the angles inside the ring like only he can.

His keys for this contest will notably be his jab, his right hook, and his utilization of feints, to thwart Teo in his tracks, who once he commits to pushing the pressure, goes all out in assault to land what he intends to land.  Loma will have to use his mind first to set Lopez up, tiring him out a little, and frustrate him before Lomachenko allows his physical skills to take precedent in the fight to make his imprint.

TEOFIMO LOPEZ JR’S BREAKDOWN OF HIS SKILLS AND VULNERABILITIES

Now as for Teofimo, he is a combination of quick, powerful and selective, so he is naturally 💣explosive in spurts, and can wreak havoc if he can connect to put you into the danger zone.  He’s a very reactive athlete, who looks to find the right body positioning to load up on his punches, and sometimes loading up on the second punch after purposely over-committing on the first punch just to get the extra torque into the shot, usually doing that with the left hook.

Now while Teofimo has a thudding left hook, he typically telegraphs the punch, making it more susceptible to being picked up visually by someone of Lomachenko’s skill-set and stature to evade, side step to get around, or to counter over with Loma’s right hook, up-jab, or inside uppercut.  Despite being incredibly strong, Teo only throws his weight around on you, when he gets you hurt or punch-drunk.  He more-so likes to operate his attack from mid-distance, working behind his variation of the shoulder-roll defense, with his preset being to look for opportunities to counter with his right-cross up top. Teofimo can however fight in all 3 levels, that being inside, middle distance in the pocket, and outside.  While he can bounce outside, 📌one of his main weaknesses is that he naturally stands flat-footed, and digs into the canvas to try and create extra torque in his shots.  It has worked for him in his 15 fights because all of his opponents (🇬🇭Richard Commey included), their styles were very linear, primarily coming forward and on a straight line in how they attacked him. 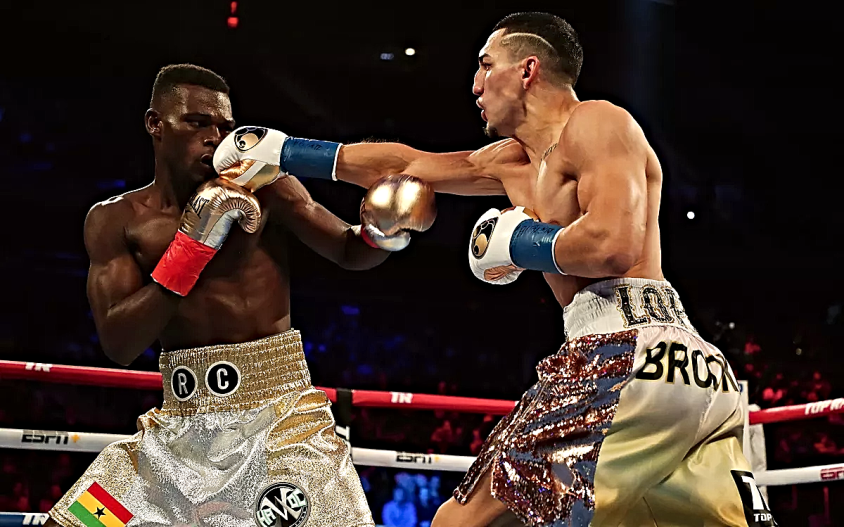 None of those opponents utilized any angles whatsoever to take advantage of the plodding footwork of Teo, to get them off balanced, or to change eye level, and for Lopez sake, going from no experience or preparation of facing someone who gives you different looks, to facing Lomachenko, who is literally the master at changing speeds, stepping around, varying his combination sequences, and at changing your eye level, while mentally/physically keeping you off-balanced with his unpredictability – this will be a disaster for Teofimo the longer the fight transitions into the later rounds.

Now as for the physical aspect of the equation, I stood next to both Lomachenko and Lopez at separate times, and here is what I can tell you.  They are both the same height, regardless of listed heights.  Lomachenko has a solid build customary of a well-rounded boxer, but Teofimo is massive all-around, to the point that I say that he might physically be the widest Lightweight that I’ve seen since

🇵🇦Roberto Duran – which is astonishing given the length of time that has passed since.  For someone to be that big at ⚖️135 lbs. is unbeknownst to me. 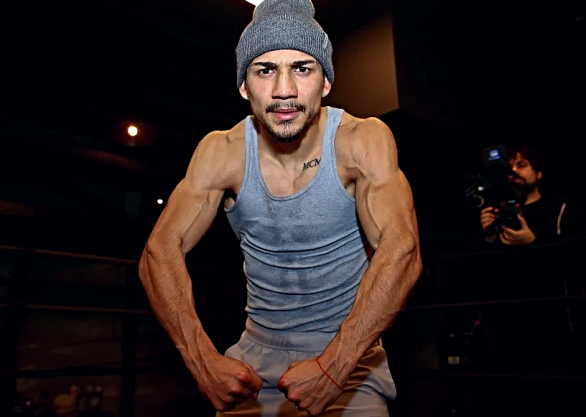 He may be young, a little immature, and wet behind the ears, but make no mistake about it – Teofimo is a very talented fighter, and at the very least, he should be given an immense amount of ✔️credit and respect for taking on the challenge of Lomachenko while he is still at the top of his game, contrary to a couple of other boxers at and around Lightweight who avoids the Ukrainian openly at all costs, and at every turn (no need to mention names here).  With the power, and the natural explosiveness that he has, he is one that has to be a considered a live dog for this contest simply due to those factors.

This one was a bit difficult to come up with, due to the uniqueness of both Lopez and Lomachenko (especially on Loma’s behalf), but style-wise in a few ways (strictly between the ropes), this reminds me of when

🇵🇭Manny Pacquiao met up with

🇵🇷Miguel Angel Cotto center ring in their 2009 Welterweight encounter.  Pacquiao being the smaller, more dynamic boxer fighting out of the southpaw stance would represent Vasiliy in this scenario, while Cotto represents Teofimo, being a big, brooding presence, who was physically stronger than his opponent, with his own set of skills that made him a dangerous foe for everyone around the division. 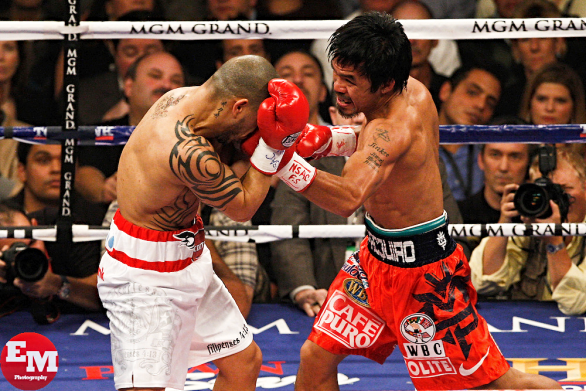 NOW TO REVEAL MY PICK FOR THIS FIGHT

🥁 || PREDICTION –  With all of their components broken down, I personally believe that it is equally as important to listen to the fighters, and their Trainer in the lead up to their fights, to see whether they have the correct perspective about their opponents, and their own abilities. Often times, boxers can tip their hand on not knowing their opponents, or getting an accurate scope of what they are capable of doing, and it typically backfires on them inside of the ring.

Now, with that being said, I must say both Lopez Jr. and Lopez Sr. are completely flying all over the place with their shared assessments.  Junior believes that Vasiliy cannot fight going backwards, which is completely asinine.  He either has not watched Lomachenko extensively, or Teo does not possess the ability to 👓scout different traits of boxers outside of himself, because Lomachenko has proven countless times that he can bounce outside, as well as shift to any distance level that’s needed for the moment within the context of a fight, so there is no void of deficiency in that area that is present.

Teofimo Sr. is essentially running the gambit by compiling unwarranted pressure on his son, and declaring him at heights that he is nowhere at, at this present point.  Now let’s be clear, there is absolutely nothing wrong in simply being a proud Father (which he is adamantly), but it does become a problem when that love ☁️clouds your overall judgement to where delusion unwittingly enters the grand picture, to where it fudges your focus on where it needs to be, and sometimes becoming the backdrop of a wrong, or flawed game plan.

These are components as to why I will

roll with Vasiliy Lomachenko winning this contest by either a strong 9th round TKO, or by a wide 12 round Decision victory.  Now with that prediction revealed, I believe that this will be a very fun fight, that may reveal a couple moments of real drama within the first 4 rounds of the contest, with Teo perhaps even buzzing the Ukrainian fighter in 1 or 2 instances, but Vasiliy will regroup, adapt, and show the difference in class between a world level boxer (Teofimo), and a 📈true elite in skill such as Lomachenko – Skills that are unfettered within the realm of historical merit. 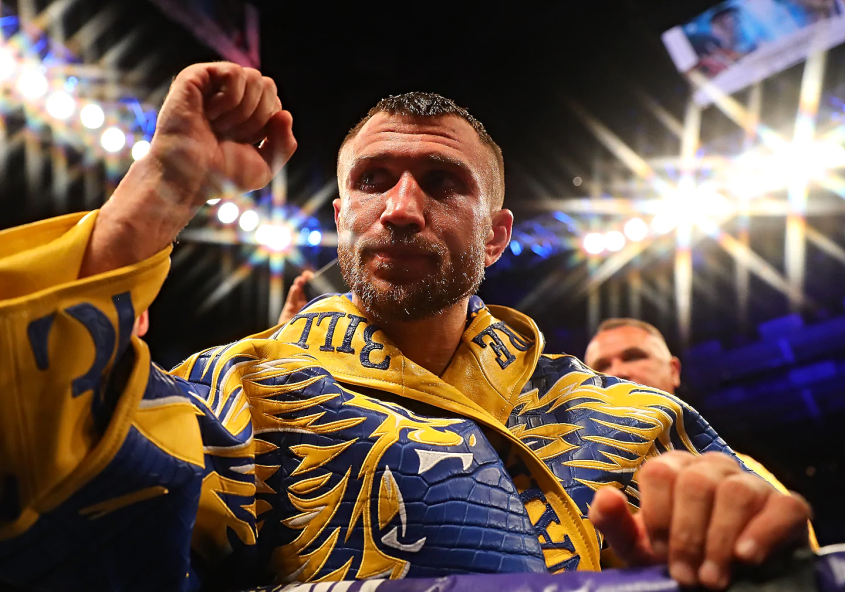