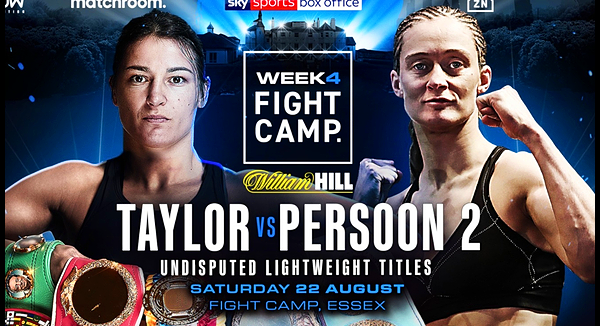 Not much else needs to be said about this one, instead simply search for the first fight to re-watch, or experience why the significance for this re-match is so high.  👑🥇🇮🇪“Irish” Katie Taylor (14-0-0, 6KO👊) by proxy is the undefeated, Undisputed Lightweight Women’s Champion of the World, though by some, the undisputed claim has some real dispute due to Taylor, and 🇧🇪Delfine Persoon’s (44-2-0, 18KO👊) razor close ⚖️50/50 encounter back on June 1st of 2019.

Each fighter has a chance to put doubts to bed, and walk away from the ring with all of the title belts.

Delfine Persoon lost her long-held WBC title by way of Majority Decision defeat, a decision that she didn’t take well, and had some backing to her dismay over the verdict.  Katie Taylor retained her ♛RING/WBA/WBO/IBF titles, adding the one belt that was missing for her Undisputed claim, squeaking out the decision.  Some believe she had edged out the fight reflective of the scorecards, but if there’s any major motivating factor for Katie, it is for her to silence the critics, and talk surrounding the first fight by putting forth a more clear, controlled performance to prove to the world that she is indeed, the best female Lightweight fighter in the world.

Taylor’s last fight, she went up to Junior-Welterweight and won the WBO strap over 🇬🇷Christina Linardatou in a sharp, spirited performance.  Persoon after the first fight with Katie took some time to operate back at the amateurs.  Her previous fight came against 🇳🇬Helen Joseph, where she won by unanimous decision victory.  The stakes for both Taylor and Persoon are high, as the winner might face 👑🇺🇸WBA/WBC Junior-Welterweight / Undisputed Welterweight World Champion Jessica McCaskill (whom Taylor once defeated) as the last leg of an unofficial final-4 bracket.

This mega-fight will take place on Saturday, August 22nd, and will be fought on 💻DAZN.