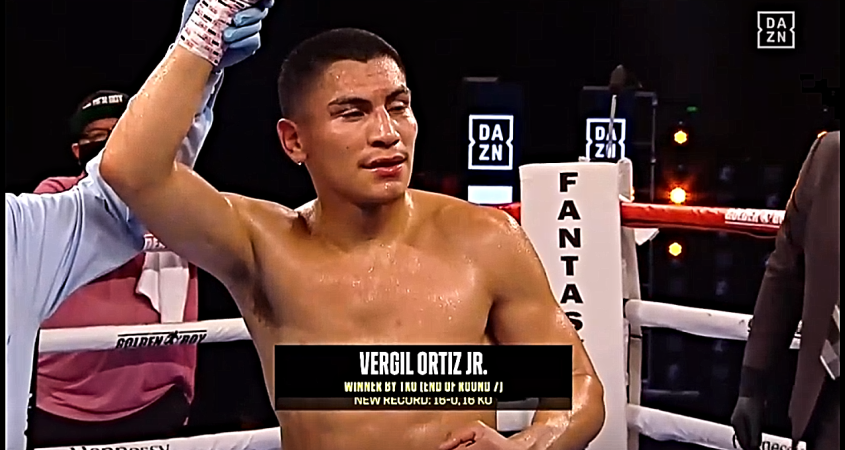 As there have been up & coming prospects who got the bulk of the attention from day-1 by pundits and fans throughout the last couple years, you get an example such as 🇺🇸Vergil Ortiz Jr. (16-0-0, 16KO👊👊) who goes about his business the old fashioned way, and through the hard work, and time dedicated to the gym, as well as the craft, his talent has risen to the forefront, where he is not only looked at by many people as the 🔝top prospect in boxing, but also one thatcan lead the pack for the new generation.  Tonight he inched closer toward his quest toward title contention in the Welterweight division, by defeating battle-tested veteran 🇨🇴Samuel Vargas (31-6-2, 14KO👊) by TKO victory in a well fought performance. 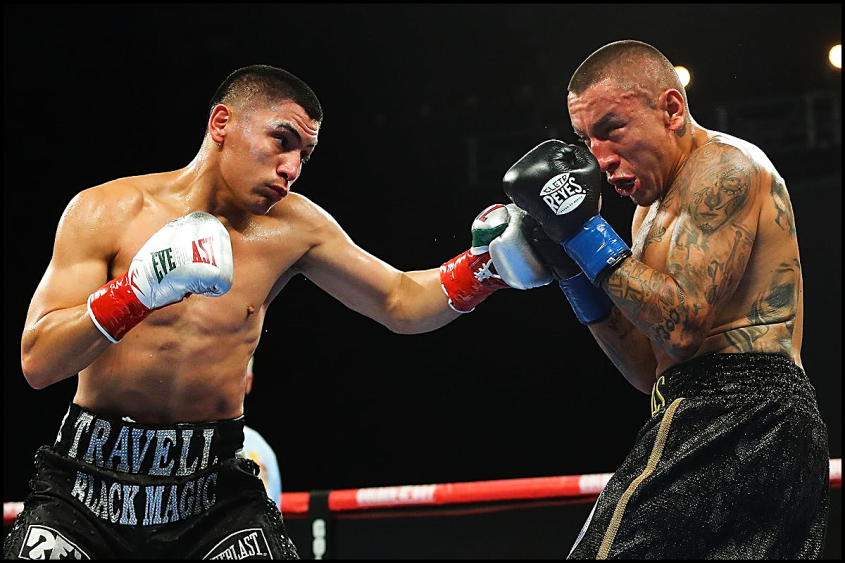 Early on, Vergil poked and prodded with the jab, establishing the distance he wanted to have, and mixing in right hands.  In the second round, Vargas took some chances and found some success getting underneath Vergil’s reach and hitting the body.  Ortiz would adapt in the middle rounds and start to fire some 💣bombs from the outside, most notably in the 4th round where he beat Vargas from pillar to post with right hands, hooks and uppercuts, but Vargas, like he has always proven throughout his career, showed his toughness and took the shots, offering some return fire trying to catch the younger fighter in between punches, but found little success in doing so.

The fight wasn’t close from the standpoint of scoring, landed blows, or ring generalship, but it was a pretty entertaining fight for what was expected.  Samuel Vargas did manage to get Ortiz to go past the 6th round for the first time in his career (which was part of his gameplan).  Vargas intended to take Ortiz into the later rounds for what would be unchartered territory in terms of experience, but in the 7th round, Ortiz hurt Vargas badly with a left-hook, and completely emptied the 🧰toolbox, hurting Samuel Vargas multiple times that also featured an ambiguous tackle by Vargas trying desperately to stay up while stumbling across the ring looking to buy himself some time.  It appeared that veteran 🗣️Referee Jack Reiss was going to allow Vargas to get to hear the bell at the end of the 7th round, but after Vergil charged in with a devastating right hand to the body, Jack put a stop to the fight a split-second before the bell sounded, thus Vergil Ortiz recording another KO victory and keeping his record perfect to date.

Vergil came into this contest ranked as the #2 WBO contender (behind 🇺🇸Danny “Swift” Garcia), vying for a potential shot against P4P great 🇺🇸Terence “Bud” Crawford, and #8 contender for the WBC sanctioning body, which is Championed by the great 🇺🇸Errol “The Truth” Spence Jr.  One thing is for sure, and that is that Ortiz doesn’t want to rush the process, but wants to be put into situations that will help him season his craft before a potential shot at the title.

The other day, Vergil stated “I only want step-up opponents, I want opponents that will help me learn for when it is time to step up to a World Title, I only want to learn.  I don’t want any easy fights.  I go through a lot in training camp and put my body through a lot of stress.  We want to make it work against opposition that will get me to a World Title”.  What I can personally gather from this is that Vergil Ortiz and his team aren’t looking to cut corners, and want to go about their ascension in a noble manner, which honestly is a breath of fresh air in a time when politicking within the boxing world has been pushed to the forefront.  In the post-fight, he mentioned 🇺🇸Keith Thurman, 🇺🇸Shawn Porter and 🇺🇸Danny Garcia as fighters he would like to fight soon.  The sky’s the limit for the young 22-year-old Golden Boy Stablemate, and it will be a pleasure to follow him along his journey, wherever it takes him.