The undercard to the Welterweight showdown in Frisco, Texas between Mikey Garcia and Jessie Vargas saw Israil Madrimov, Diego Pacheco and Alexis Espino continuing to climb their respective ladders.

Espino, 20, was forced to work past four rounds for the first time in his career as the Alabama native proved to be a tough out, and the normally orthodox fighter threw a kink in the gameplan by fighting out of the southpaw stance. By the fourth round the Las Vegas native was breaking down Delvecchio, 23, by working the body and connecting consistently up top with the right hand, and while he was unable to put him down, it was clear he was in control throughout.

The second fight of the night saw another highly touted Super-Middleweight prospect take the ring in 18 year old 🇺🇸Diego Pacheco. The South Central Los Angeles native took on Mexico’s 🇲🇽Oscar Riojas in a six round bout.

Being half the age of his 36 year old opponent wasn’t the only advantage held by Pacheco in this one. Standing at 6’4″ Pacheco fought tall, and used his 79 inch reach well, fighting behind the jab and using it to set up his sharp right hand.

Riojas didn’t present anything offensively for Pacheco to worry about, but he hung in strong throughout the fight and survived an onslaught from Pacheco after being rocked by a right hand in the last half minute of the final round. With all three judges scores of 60-54, Pacheco improved to 9-0-0, with 7 knockouts and Riojas drops to 21-13-1 with 10 knockouts. 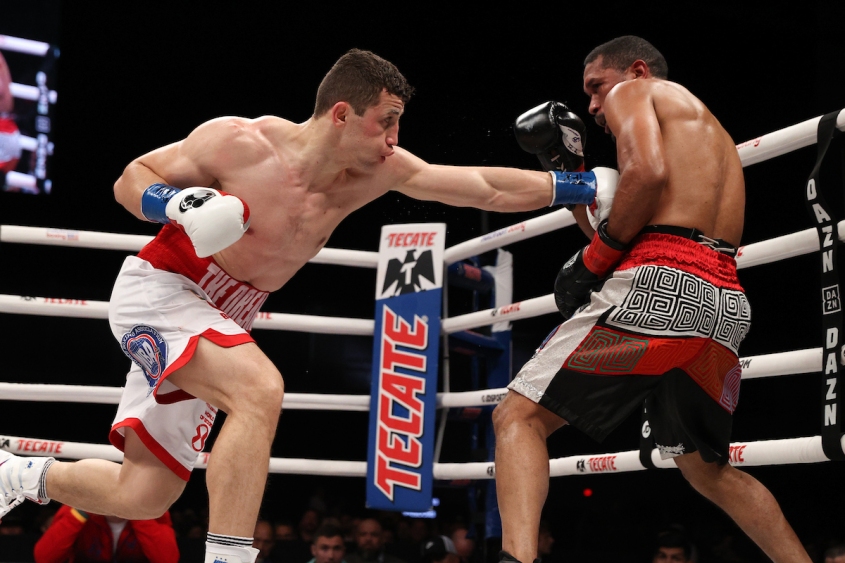 From the start it was clear the 24 year old Madrimov was going to be a handful for the 40 year old veteran. Madrimov had his dancing shoes on, displaying his footwork against Navarro in the midst of his two fisted attack, easily switching from orthodox to southpaw when moving in and out delivering his power shots.

Clearly flustered from Madrimov’s movement, pressure and power, Navarro remained game but was put down twice in round six, the first by a crippling body shot, and the second started off by a right hand to the head and finished with another body shot that caused referee Rafael Ramos to wave off the fight at the 2:24 mark. With the win Madrimov keeps his knockout percentage perfect at 5-0-0, 5KO and Navarro is now 29-10-0, 22KO.