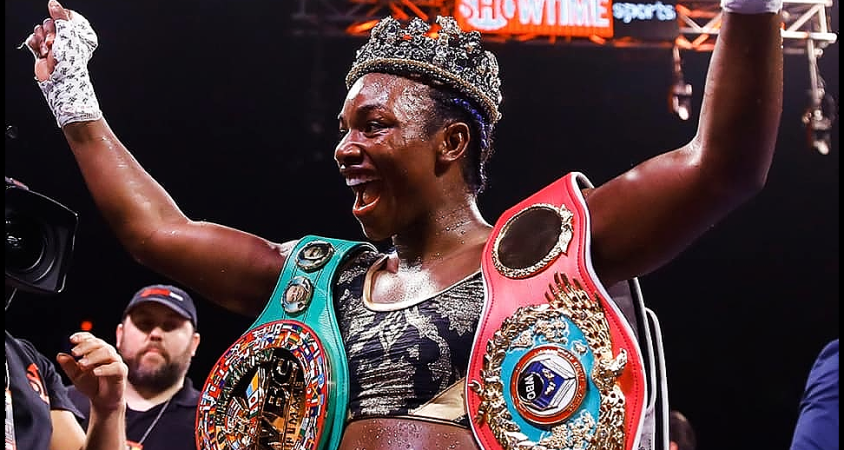 DISCLAIMER # – Shields 2 Records Achieved are Realistically Records Set Without Gender Divide, However With Male and Female Boxing Being Vastly Different, it Only Seems Fair to Keep the Records Isolated to Each Side of the Coin by Gender.

THE PATH TO THE GOAL:📈 A Confident, boisterous, and decorated athlete is the best way to describe

🥇🥇🇺🇸Claressa “T-Rex” Shields (10-0-0, 2KO👊).  She is a polarizing figure in the world of boxing, and for legit reason both negatively and positively if you were to weigh out her pros and cons, but the one thing that is not to be questioned is her desire to be great and in traveling on her quest toward greatness.

Upon becoming a double-Olympic Gold-Medalist (being the only woman to accomplish this feat in history), she wanted to immediately make her mark on the sport, with aspirations of her stepping in and staking claim as an ambassador to help grow the women’s side of the ledger in the world of boxing. Her first fight was against future Champion 🇺🇸Franchon Crews Dezurn, who up until this previous Saturday was a Champion in her own right since 2018.

Her first 2 Titles (WBA & IBF) she won on the same night in her 4th overall fight when she defeated 🇩🇪Nikki Adler at Super-Middleweight.  She would soon vacate her Titles to fight and defeat quality opponent 🇨🇷Hannah Gabriels at Middleweight for the vacant WBA & IBF Middleweight Titles.  With 4 Titles to her name in 2 divisions, she would go for the gusto to become Undisputed Middleweight Champion as she took on and dominated 🇩🇪Christina Hammer to take her WBC & WBO Titles, while also being awarded the ♛RING-MAGAZINE belt, signifying her as the queen of the division.

On Saturday, she would win her 8th and 9th World Titles by collecting the vacant WBC & WBO Super-Welterweight Titles against 🇭🇷Ivana Hazabin to become a 3-division Champion in just 10 professional outings.  With her also reigning as the Undisputed Middleweight World Champion, that makes 7 Title belts that she is currently in possession of.

SOME CLARITY & PERSPECTIVE – Women’s boxing is still in the process of 📈growing, while it is actively searching for its own identity in trying to figure out how to market the brand, and finding enough quality fighters to bring to the table to spark the right type of interest, but Claressa Shields has tapped into the imagination of her supporters and breathed life into the sport with her level of talent.

Her journey is ongoing, and as she continues loquaciously on her campaign, telling anybody with ears that she is indeed the G.W.O.A.T. 📍(greatest woman of all time), she is certainly putting together a heavy campaign for women’s boxing towards giving her proclamations credence in the minds of some.  One could point out that many of the Title belts she won were vacant, as a demerit, and that logic can be applied to make a compelling point.

What I will say to that is while women’s boxing has some quality talent at the top of the 🎫ticket, the overall depth is lacking at this present state, so there aren’t that many fighters who could fit the bill as Champion to step in for Championship honors, but Claressa has been doing her part in setting and re-establishing the benchmark of what it means to be a woman prizefighter, and the sport may produce more top-tier talent because of it.