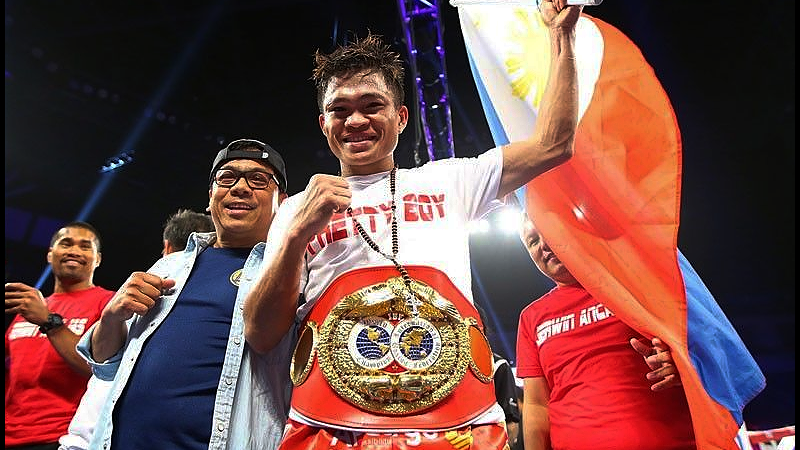 Consistency is paramount in the sport of boxing, and in life throughout. There are very few fighters today that come as consistent as IBF Super-Flyweight Titlist 🇵🇭Jerwin “Pretty Boy” Ancajas (32-1-2, 22KO👊), and he performed well up to his usual standard to take care of and dominate Chilean challenger 🇨🇱Miguel “Aguja” Gonzalez (31-3-0, 8KO👊), delivering to him his 3rd loss and knocking him out in the 6th frame to make his 8th Title defense.

Methodical, ring generalship, fighting at a measured pace was the daily dose that Ancajas administered to Gonzalez, flicking the right jab out there to keep him occupied upstairs while Ancajas would often dart in to land some hooks and crosses to the midsection of the Chilean fighter, and did so with good success. Gonzalez didn’t show up just for the 💵paycheck, as he tried to establish an imprint on the fight and lay some groundwork, trading with Ancajas and trying to get something going to his midsection, but Ancajas gave him limited looks to land anything of significance in combination punching, and kept Gonzalez out of his desired range. Ancajas landed some serious leather in the 3rd round spearheaded by a piston of a left cross that landed while Gonzalez was off balanced leaning in, and staggered him backwards, where Ancajas darted in to amplify the punishment and dug a couple nice right hooks to the ribs.

From the 4th round on, Ancajas increasingly found a home to land the left hand straight through Gonzalez guard, and Ancajas used it to systematically break him down while staying defensively sound fundamentally and picking off a couple of pretty clever attempts by Gonzalez trying to double step to get inside and land something. The 6th round, Jerwin changed tactics and decided to pressure Gonzalez, fighting him head on. While Gonzalez had his head buried on Ancajas shoulder, Ancajas ripped in an uppercut that severely stagered Gonzalez, so Ancajas swamped him with activity. Not all the shots landed, but enough did to put Gonzalez in a drunken state, and he went down on his own accord. While not a knockdown, his legs and cognition were completely gone, so as the action ensued, Ancajas continued throwing bombs, landing a couple stiff left hands to force Referee 🗣️Wayne Hedgepeth to step in and call and end to the contest in the 6th round.

The future is very bright for the 27 year old Filipino Champion who is very much a veteran of the sport despite what his age would indicate. A battle tested warrior, the one thing that has eluded him up to this point is in securing a high profile match-up with an elite opponent, but you can’t fault him for lack of trying. It feels like he is inching closer and closer toward that mega-match, and may get it within the next year. Where that major opportunity would come from though is the mystery, but he has plenty of options. The Super-Flyweight Champion of the World is Mexican great ♛🇲🇽Juan Francisco Estrada, and at this point, that is the big ticket for everybody around the weight in terms of critical acclaim, notoriety and a solid payday, so as Ancajas holds a trinket of a Title, he can continue to try and force his hand toward that match-up in efforts to trying to become thee man of the division. The most logical match-up it would appear for Ancajas to get is a super-fight with fellow countrymen and former 4-division World Champion 🇵🇭Donnie Nietes, and that certainly would make for a Super-Bowl level attraction for all of the Philippines, as it would easy be identified as the biggest match-up in the history of the country, and perhaps its greatest sporting event overall.

Ancajas could also turn and look at Japanese 4-division great 🇯🇵Kazuto Ioka, who currently holds the WBO Title for a potential unification match at Super-Flyweight, or he could even look at still considering a fight with former Lineal World Champion 🇹🇭Srisaket Sor Rungvisai, who appeared to be inching toward that fight before his loss to Estrada in their re-match. There are also a litany of match-ups at Bantamweight 1 division up that Ancajas can also entertain if he ever feels like his available options dry up at Super-Flyweight, names such as fellow countrymen 🇵🇭John Riel Casimero, who just busted onto the Bantamweight scene by winning the WBO belt, and of course a giant match-up with the Bantamweight Champion of the World ♛🇯🇵Naoya “The Monster” Inoue, which would be the ultimate risk of all risks. Ancajas has many doors to knock on, lets see who will ultimately answer.