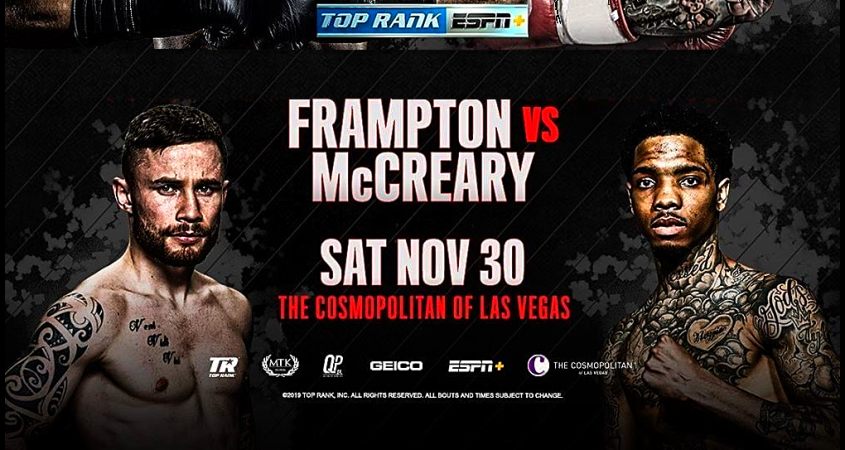 Northern Ireland’s skilled popular former 3 time, 2-division Titlist 🇬🇧Carl “The Jackal” Frampton (26-2-0, 15KO👊) is looking to take the necessary steps toward getting back to Title contention, but first he must deal with unbeaten Ohio-born boxer 🇺🇸Tyler McCreary (16-0-1, 7KO👊) to serve as the co-headliner to Valdez/Gutierrez main event. This fight will be fought at the Cosmopolitan, and will be aired exclusively on ESPN+.

Carl Frampton is a very self aware individual, and he understands at this juncture in time that although he is still in his prime at peak form, he is starting to gradually drag toward the middle of the pack when you look at the upper echelon of the Featherweight division. Much of that has to do with new talent busting their way through the ranks and making a name for themselves, acclaimed fighters such as 🥈🇺🇸Shakur Stevenson, 🥈🇲🇳Tugstsogt Nyambayar, 🇨🇳Can Xu, and so forth.  Some of it also has to do with the Jackal falling a little short in his last couple of big fights against 🇲🇽Leo Santa Cruz in the rematch, and against 🇬🇧Josh Warrington. He will look to make one more push toward obtaining a Title belt, but he has indicated that if he is unable to clear McCreary on Saturday night, that he may call it quits at the age of 32, refusing to allow himself to be relegated toward stepping stone status.

For McCreary, he comes into this fight undefeated, albeit against that of lesser opposition. Although that is the case, it does not mean he isn’t capable of fighting at this level, as time and time again we see in boxing young fighters able to skip steps due to sheer ability, belief and in-fight recognition. McCreary isn’t well known, but he possesses pretty solid skills, and the tall 26 year old Featherweight (he stands at 5’9) will look to bust through the door to make a major statement towards leaping into the top 10 if he were to win here.  His last outing was a Split-Decision victory versus 🇵🇭Jessie Cris Rosales in an 8 round affair.  The gap between a Frampton and a Rosales doesn’t need much analysis to understand what McCreary is about to face, but he will now see where he stands by fighting his first Championship caliber fighter.