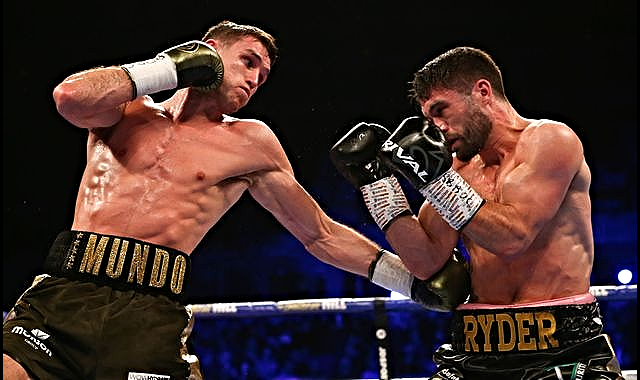 Serious-minded peaking challenger 🇬🇧John Ryder (28-5-0, 16KO👊) gave the Liverpool crowd his best effort and made it a tough scrap, but ♛🇬🇧Callum “Mundo” Smith (27-0-0, 19KO👊) put enough points up late in the minds of the Judges to secure the victory in his favor to successfully defend his RING-MAGAZINE & WBA Super-Middleweight Titles for a second time.

The fight had a slow build up due to both boxers taking a long look at each other and keeping their cards close to their chest as to what the game-planning tactics were. Ryder displayed excellent head movement and defensive maneuverability to constantly change looks for the tall Champion to assess. Ryder also worked himself inside to try and man-handle Smith and get to his ribs ,but Smith protected well and didn’t seem bothered at all by the challengers aggression. Callum found himself in a competitive match early with Ryder delivering his peak personal performance of his career that carried throughout, so Callum decided to take the methodical approach to maximize the view of Ryders head movement to find creases where to land precision shots. Smith was cut in corner of right eye in 4th round due to an accidental headbutt with both fighters coming in trying to commit to their respective bodyshots.

The action of the fight began to pick up by round 6 and Smith started landing some stiff left crosses. The southpaw Ryder became more engaged in the middle rounds and stayed in Callum’s kitchen trying to string shots together. A Smith right hand counter in the middle of a Ryder counter landed flush in the 8th round and looked to bother Ryder, but it didn’t deter Ryder from continuing to work. Callum for the first 2/3rd’s of the fight looked a little bored, and was lethargic, willingly parking on the ropes while Ryder was intent on trying to outwork and do damage on the Champion. While Ryder didn’t string a lot of good combos together, he did good enough work to tack on the points while Smith went through his periodic lulls and found solid pockets of success. The fight felt like a tight one with the scoring aspect of the fight, and in the 11th round, the intensity picked up. Smith’s face was bloody on both sides now, and Ryder opened up his attack. Callum began to trade more, though it appeared he had lost his rhythm with his punches and missed a few bombs. Leading into the 12th round, Smith was clearly fatigued, but he mustered up a good rally landing solid counter punches at will. Ryder being the enforcer he is continued to try to answer back those bombs with his. A feverish pace it was to close out the 12th and final round, and both expressed body language that they both felt they won the fight. A very intriguing fight to score, and the anticipation of the Judges scoring made it that much more interesting to see who they sided with.

The scorecards respectively were too wide, and it did a disservice to John Ryders overall effort…nonetheless, Smith’s effort met his head on, and he was awarded the victory. Ryder though he doesn’t have the hardware to show for, has proven himself to be an elite Super-Middleweight, and if he looks to continue, may have a late career arc similar to that of recently retired 🇬🇧Tony Bellew who really got it together towards the back-end of his interesting career. As for Smith, though it was very nip and tuck…business as usual, and he hopes to get the big business as he continues to target the best revenue and competitive opportunities with names such as ♛🇲🇽Canelo Alvarez, 🇬🇧Billy Joe Saunders, and some right opportunities up at Light-Heavyweight. An interesting scrap it was, and it will be intriguing to see where both fighters go from this point on. Here is how it was scored by the official judges and how we tallied it up here at Project Combat