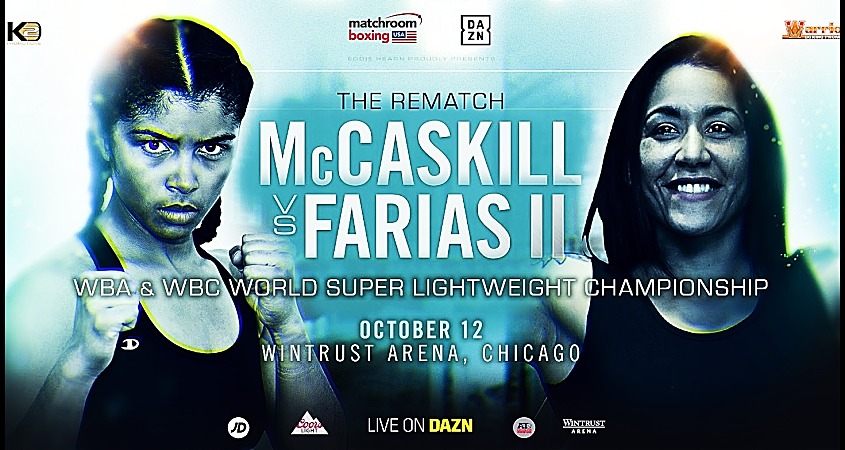 A quick preview of other fights to keep an eye on Saturday’s fight card in Chicago.

MCCASKILL AND FARIAS RUN IT BACK: WBC/WBA Women’s Super-Lightweight Champion 🇺🇸Jessica McCaskill (7-2-0, 3KO) will be in action for the second time at the Wintrust Arena in Chicago on the Oleksandr Usyk-Chazz Witherspoon undercard Saturday.

The 35 year old Mccaskill who makes Chicago her home, will be taking on Argentina’s 🇦🇷Erica Anabella Farias (26-3-0, 10KO) in a rematch of a fight that took place approximately a year ago. In their first meeting McCaskill successfully defended her WBC title by unanimous decision before picking up the WBA strap in May of this year against Anahi Esther Sanchez.

McCaskill feels she can dictate the pace even better against Farias this second go around and is the superior athlete in the ring, but wants to add the dimension of power to her arsenal, so she wants to deliver a knockout this weekend. The fight will be on DAZN Saturday starting at 7pm ET/4pm PT.

TJ DOHENY RETURNS: After waging war with unified World Super-Bantamweight Champion Daniel Roman in April, Ireland’s 🇮🇪TJ Doheny (21-1-0, 15KO) will attempt to shake the rust off in a scheduled 8 round bout. The former IBF beltholder will do battle with Colombias Jesus Martinez (26-9-0, 13KO), who currently resides in Hollywood, Florida. This will be the tenth fight for the 38 year old Martinez since 2018, and he is 3-6 in his past nine fights. He has been in with tough competition in the past including Azat Hovhannisyan and Luis Nery, but I suspect this is a fight Doheny will win comfortably on the cards or late TKO.