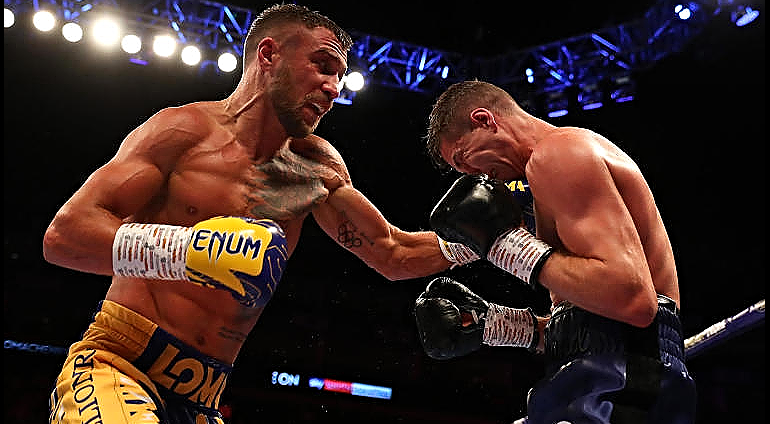 Both fighters were in peak form, and customary to when 2 Gold-Medalists operate at a high level in the ring meet one another at center ring, a wide bag of tricks and constant ongoing adjustments were showcased throughout the bout that gives credence to both Lomachenko’s P4P status as a brilliant tactician, and towards Luke Campbell’s impressive amateur pedigree, and vast improvement under current Head-trainer Shane McGuigan.

Much like what we had expected, referenced in our fight prediction for this contest, Lomachenko had to take his time and a very measured approach to get used to the 6 inch reach advantage and big height advantage from the English southpaw, so as he was trying to assess weaknesses to exploit and in establishing his desired distance, Campbell for the most part stayed on the outside and was defensively accountable in using his probe lead hand to keep Lomachenko outside, with a clear tactic being to take away opportunities for Lomachenko’s money punch, which is the right hook.

Lomachenko started to pick up a more angled approach, mixing in some crosses to the body, and the occasional up-jab that he sweeped over to get around Campbell’s right hand towards his left side, and found pockets of success in doing so. While Lomachenko made the subtle adjustments necessary, Campbell held his own in fighting competitive rounds with the Ukrainian boxing savant.

While Lomachenko though was winning the rounds, Campbell wasn’t outright overwhelmed as has been most Lomachenko opponents, some of that being due to his size, some of it due to his skill level, and much to do with his overall technique that he brought into the ring with him. In the the 5th round, Lomachenko hurt Campbell to the body with a well placed left cross and had the english-man hunched over. Looking to be in fits of trouble, Campbell showed enough moxy to survive that moment and bounce back looking to fire leather.

The final adjustment that was made by Lomachenko was in the middle rounds where he noticed the only way to get his left cross to land the way he wanted to land it, was to time Campbell and dart in more aggressively than we’re used to seeing, and elongating the punch to get to the chin to snap Campbell’s head back. Though Campbell never adjusted to that subtle tactic change, he refused to be mentally overtaken by the man dubbed as “The Matrix”.

The 7th round was one hell of a round, and it was spearheaded when Lomachenko landed a solid shot on Campbell right by the ropes, and with both fighters awkwardly touching the ropes, Campbell fired a very sharp left hand to the jaw of Lomachenko that actually momentarily staggered the Champion, however Lomachenko never lost his wits about him and instead came forward aggressively in the middle of the round to get his momentum and points back, and fired multiple combinations in a feverish barrage of punches to hurt Campbell to culminate what should be a choice candidate for 2019 Round for the Year.

In round 8, Lomachenko stepped up his aggression immediately to test where Campbell was mentally, and took further control of the fight, though Luke was still mentally in the contest. In round 11, Loma slipped an incoming shot from Campbell and landed a beautiful 3 punch combination of a left cross to the body, right hook to the body, and came upstairs with a left hand to wobble the WBC #1 contender, and eventually put Luke down to the canvas.

Luke got up but was in all fits of trouble, and was on the retreat as Lomachenko tried to go in for the finish. Considering how much back-peddling was taking place by Campbell trying to survive, and with this being a mentally and physically grueling fight for both boxers, Lomachenko decided to back off to take to the center of the ring to reset his attack and to get a breather.

In the 12th round, Lomachenko put in enough work to weaken Campbell some more, and looked to close the show towards the end, but Campbell hung in there like a true fighter and made it to the final bell.

Though the feeling in the O2 arena was of a comfortable win on the cards for the Lightweight Champion, it was quickly replaced by outward jubilation with the English crowd very pleased of their man Campbell’s effort to force an exciting fight and in periodically testing the P4P great.

The scorecards were accurate, though even though the scores were wide, they didn’t reflect that although Campbell was losing the rounds, he was in the rounds from a competitive standpoint. Lomachenko got his victory, and is now one step closer towards his ultimate goal of becoming an Undisputed World Champion.