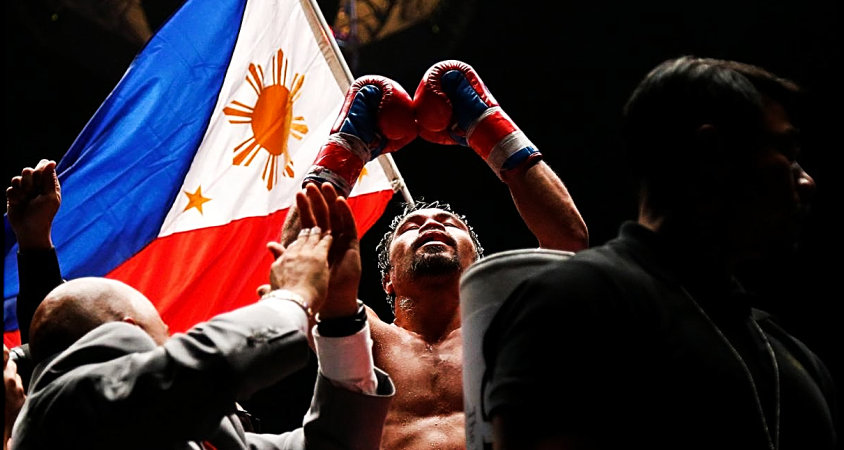 Life was lived at its most simplistic in General Santos City, Philppines, and the hardships remained a crux towards every decision that was made by the family, that was a determinant on whether they would be able to eat a bowl of rice for the day.

🇵🇭Manny Pacquiao was one of six siblings living in a 1 bedroom spot was in his young teen years where he felt the need to step up to the plate, accelerating his maturation process to try and help the family out through his hardships.

He dropped out of High School and resorted to selling stolen cigarettes to make an earning to contribute to the family. He did what he had to do, but understood that was not nearly enough, and that something had to change for his families well-being, as well as his.  Manny was introduced to boxing by his uncle, and he took an immediate interest. As the years passed, Manny decided to take a gamble and step out of his situation, so he hitched himself on a boat that was sailing to Manila in the Philippines, to further expand on his new-found interest in boxing and see what he could make out of it.

He did so, gaining some amateur experience, but for Manny to really start to make some real paychecks, he had to get to the Professional level, which was a difficulty due to his stature. He stood at 4’11, and only 98 lbs as he had his eyes set on the Strawweight division, but to qualify for the division, you have to be 105 lbs. Manny got away with sticking rocks in his pockets so that he could make the 105 lb limit to qualify for his first fight in 1995 at the age of 16.

He would rely on his hunger, punching power and speed to mow through the competition, and eventually worked himself to a Title shot at Flyweight for the Lineal Championship of the World against

🇹🇭Chatchai Sasakul. Manny won the contest by devastating knockout to become a World Champion, and from that point going forward, he never looked back…in fact the only time he looked back was to help his family and the people of the Philippines the more successful he became, a true testament of character and a full circle situation for the kid who used to be in the shoes of those who he now helps.

His upbringing is known by some, and his enormity of success in the public eye is globally recognized, so when you combine his upbringing with his triumphs, it is an amazing turnout. Who knew that this young, hungry kid would grow to become the second highest grossing boxer of all-time, who also went on to become boxing’s only 🏆5-division Lineal Champion, boxing’s only 🏆12-time Titlist, and historically, boxing’s only 🏆8-division World Champion? no one, but Manny worked until seemingly unreachable goals were obtained, and surpassed.