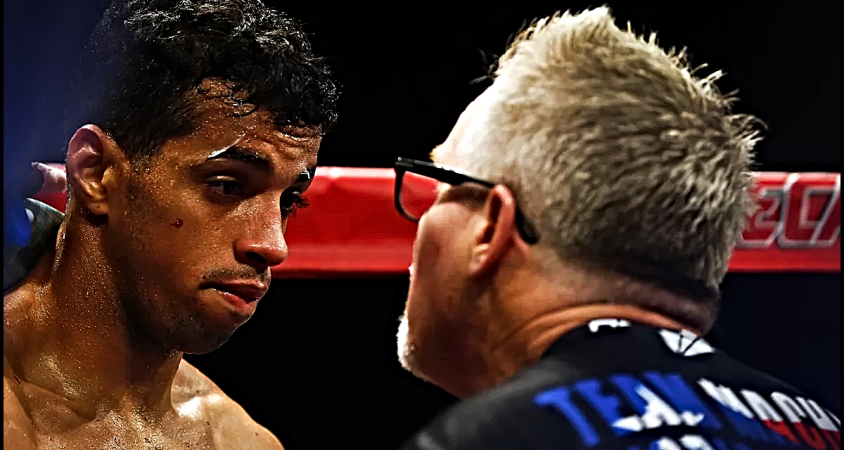 After this weekends events, 🇵🇷Alberto Machado (21-2-0, 17KO) found himself once again on the wrong side of the coin as he dropped a second straight bout to Mexican-American fighter 🇺🇸Andrew Cancio, once again by knockout in an eerily similar fashion to the first fight. We will examine what that all means, what needs to be done, what should have been done in the first place after the initial fight, and the steps he can take to get him to another level as a young talented boxer with room to grow both upstairs, and in the skills department.

First things first, while there are weaknesses to his arsenal, his rooted fundamentals are very good, and is evidenced by him hardly ever getting off balanced, firing his punches wide, or putting himself in poor position to let off – instead his setbacks come in a different variety. These are areas in which can be corrected altered, but to fix them, you have to address them first, and they have not been addressed up to this point, which is a problem.

Even with those shortcomings highlighted by Andrew Cancio in their first match, it was revealing enough to give Machado, Roach & company something to feature on a video study to break down and analyze. What was shown in that fight was that Machado’s range perception is often a little off, where many times he will operate too close inside, failing to routinely utilize his massive height and reach advantage over virtually everybody at and around his weight.

He is a giant at Super-Featherweight (putting it into full perspective, he’s roughly the same height as 🥈🇰🇿Gennadiy “GGG” Golovkin, who is a Middleweight), yet in Machado’s case, that works to both his advantages and disadvantages. His main advantages are that he’s active, with a lot of power from the southpaw stance (which is is how he got his nickname), with a good deal of speed, and a good high-guard.

The problem with his frame is that there is a lot of torso to hit, and because there’s a lot to hit, the high guard doesn’t protect the body the way it normally would with shorter fighters, where Machado’s elbows don’t extend all the way down to the waist line, exposing a lot right above the belt line. The second problem in this scenario is that Cancio also shown us that Machado doesn’t have that good of a punch resistance to the body, and he can be very vulnerable in that area, especially when you factor in the defensive positioning and style that he operates with.

With those two components intertwined, it can be a recipe for disaster against shorter, effective body punchers, and at the top level, there are plenty of those lurking in and near his division.  For Machado, his reflexes are quick enough to keep one hand up to block upstairs, and keep one hand down to protect the body, to keep fighters honest, making them feel as if they have to over-extend themselves to land power shots upstairs, while the body benefits from better protection.

Another thing is something that Machado & his team all are fully aware of…they understand that it is time for Machado to make the venture up to the Lightweight division. Machado is naturally a strong legged fighter, yet he has been slightly compromised in trying to kill himself to make the weight of 130 lbs. to continuously function to the level that he’s been operating at since his ascension to becoming a top-contender before his breakthrough against 🇵🇦Jezzrel Corrales. Those extra couple pounds he has to shed also weakens the legs, as well as the body, which is somewhat of a contributor to what his body can handle resistance wise with a strong body attack, but it is only a 󠀥󠀥fraction of that as to the reasoning why.

Machado knew a move to Lightweight was imminent after the 1st fight, but he decided to stick around for one more fight at 130, to try and regain his secondary belt from Machado back immediately, which deserves a ton of respect, being that it showed his fighting spirit, and the willingness to get up and try again. The problem here though is that he came into the rematch with the exact same hang-ups, while Cancio looked like an improved version of himself and exploited the same areas he had before back in February of 2019.

The main thing that they need to address though is that Machado does not know how to hold, or to properly hold in preserving himself. I will say this…for people who truly watch all of boxing (actively in every division), the sport is in a very healthy place in terms of its talent right now (something I couldn’t say 5-7 years ago). If there is one drawback, then I would challenge Trainers, Head-Trainers and people aspiring to Train…to teach your young fighters how to hold, and practice certain maneuvers to keep themselves afloat whenever they do get in trouble, because no matter how good your fighter is, they will face a moment of turmoil at some point, and the difference between a prepared, aware fighter in those circumstances and one who has never been put in that predicament, without the training for it or the correct mindset to get themselves out of a jam, can be career altering in terms of their projection, and their prospects.

IN SHORT – For Machado’s case, he only lost 2 fights up to this point, nothing to fret over at all in terms of his maturation process throughout the whole ordeal of being a Prize-Fighter, but for him to get to the level he wants to get to, these are certain factors that he can improve upon to get up, dust himself back off, and back on the horizon as a stronger fighter, and a force to be reckoned with.