#1 WBSS Seed 🇱🇻Mairis Breidis (26-1-1, 19KO) delivered a big knockout victory in the 3rd round over Poland’s 🇵🇱Krzysztof Glowacki (31-2-0, 19KO) in a fight where highly bizarre situations arose in culminating to that point, most notably taking place in (or after, depending on how you look at it) the events that occurred in the second round. With this victory, Breidis has become the new WBO Cruiserweight Champion of the World… The first round was a feel out round, gauging each others speed and distance to see what they could throw, and when they could throw it. In the second round, Glowacki threw and landed a dirty rabbit punch that landed squarely on the back of Breidis neck, so Breidis followed up immediately by wacking Glowacki with an illegal elbow for everybody to see, and Referee Robert Byrd decided to take a point away from the Latvian fighter. 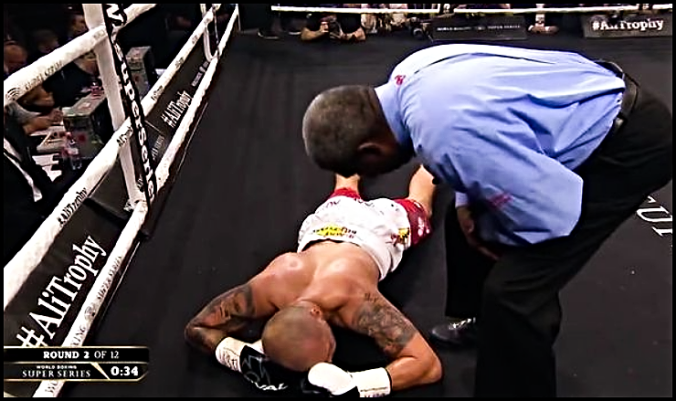 Speaking of Robert Byrd, one of the strangest scenes I’ve seen in a long time, they fought all the way to the bell signaling the end of the round (or so it should have been) but the bell was heard by all at Ringside, most in the arena, and of course all at home with enhanced audio, however Byrd couldn’t hear the bell, and the round kept on for another 40 seconds or so (in total) as the bell rang profusely, and Glowacki continued to take punishment after the bell was rung, eventually being put down with a strong combination. He was given the 8 count, then cast back off to action, to where a livid cornerman jumped into the ring as the action was still ensuing, to signal to Byrd that the round had BEEN over, while the bell still rang repeatedly before Byrd signaled the end of that round…an atrocious moment for Robert Byrd and for the sake of the WBSS.

In the 3rd round, a war broke out, with Glowacki hurting Breidis, but Breidis came right back with some big power of his own, wobbling the Polish fighter, then knocking him down and out in devastating fashion with an uppercut, then a sharp right hand that put his man away.

There’s no telling whether Glowacki was feeling the effects of his knockdown after about 3:30 seconds of action in what was the second round (I’m most certain that he was), so with how this fight played out, an awful Referee job has ruined a premiere match-up of 2 elite Cruiserweights where there wasn’t a clean slate, to where concessions can legitimately be made. Nonetheless at least the action that we had just witnessed was good action once the fight opened up, but the controversies intertwined in this match supersedes the action that had just took place unfortunately.

With all that being stated, we now have the second installment of the World Boxing Super Series (WBSS) Cruiserweight Tournament Finals officially set, as #1 and #2 Tournament Seeds 🇱🇻Mairis Breidis and 🇨🇺Yuniel Dorticos (24-1-0, 22KO) will meet to make official stake as the ♛Ring-Magazine Cruiserweight World Champion, and holder of the prized coveted 🏆“Muhammad Ali” trophy, each signifying the victor as the official Champion in the Cruiserweight division.