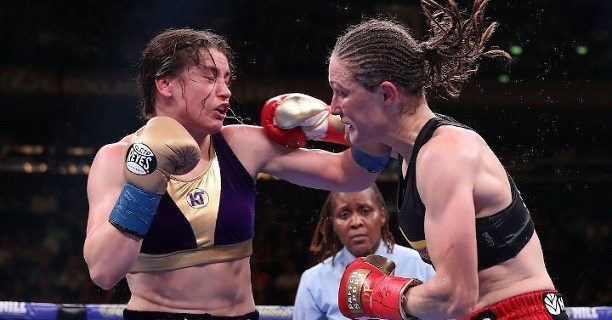 “I DEFINITELY DID ENOUGH TO WIN, BUT I’M HAPPY TO HAVE A REMATCH IF SHE WANTS IT.  WE WILL SEE WHAT HAPPENS.”

🥇🇮🇪Katie Taylor (14-0-0, 6KO) of Ireland made it clear that she welcomes a rematch after her majority decision victory over 🇧🇪Delfine Persoon (43-2-0, 18KO) of Belgium, which has been disputed by fans and boxing media alike to say the least.

Persoon gave Taylor all she could handle and then some Saturday night, doing enough to earn the win or at the least a draw in the eyes of enough to warrant a second fight. No matter how you scored it, both women gave womens boxing the fight it has been seeking for years and Persoon proved she is a serious player in the division, adding some much needed depth where competition has been scarce.

Unfortunately for the Belgian, she may have to wait for her second crack at the undisputed title as Taylor’s manager Brian Peters wants to do her next fight in the Big Apple again, this time against a native New Yorker. This could mean we are finally looking at Taylor in the highly sought after matchup with seven division Champion 🇵🇷Amanda Serrano (36-1-1, 27KO) of Puerto Rico who resides in Brooklyn, New York.