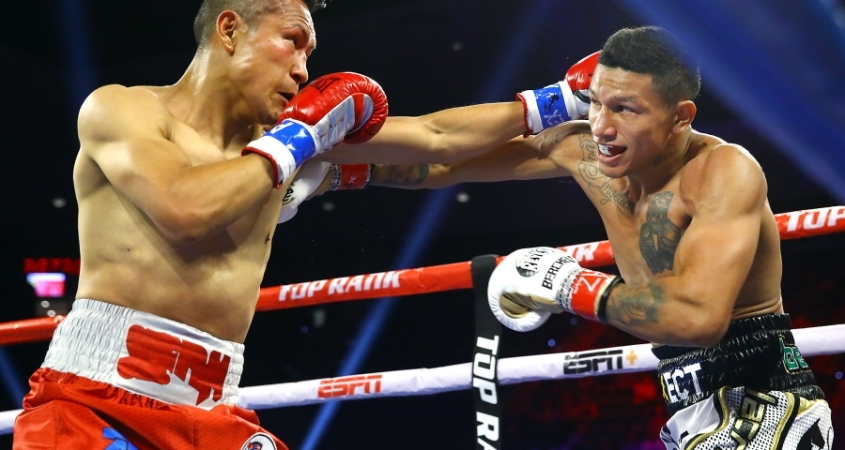 I have always had a special appreciation for Francisco Vargas. The battles he engaged in with Takashi Miura and Orlando Salido are legendary. When he took to the ring, I never doubted that I was going to see him leave every ounce of himself in there, or that he was going to force his opponent to do the same before he would take a loss.

After 25 fights, that first loss eventually came in 2017 at the hands of the young, hungry Cancun, Mexico native Miguel Berchelt. Vargas, the WBC Featherweight champion, went toe to toe and blow for blow, with Berchelt, engaging in a classic battle of wills that was a finalist for Ring Magazine Fight of The Year. Berchelt battered and cut Vargas up on his way to stopping him in the 11th round to take his belt, but he got a first hand account of the relentlessness that came in a fight with “Bandido”.

After that win, Berchelt not only had his first title, but he also gained the respect and praises from boxing fans, Mexican and otherwise. The 25 year old champion had not just won, but he had stopped a blood and guts fan favorite, by displaying equal characteristics. Following that up with a title defense against another hard nosed opponent in Miguel “Mickey” Roman, whom he stopped in 9 rounds, Berchelt had all but solidified himself as a force in the Super-Featherweight division.

That brings us to Saturday night in Tucson, where part 2 of Berchelt vs Vargas took place in front of over 4,400 fans. With the Mexican fanbase making up the majority of those in attendance, I was honestly expecting it to be 50/50 with the amount of love shown to each fighter once the bell rung. Turns out, it didn’t even take that long. Now don’t get me wrong, the love was strong for Francisco Vargas.

The crowd was on their feet and you could hear the cries of “Bandido” as he made his way to the ring donning his black cowboy hat, black and red poncho, and the red and black bandana around his face that completed the package of his moniker. But once Vargas was in the ring, you could feel the energy crank up another level for the man coming next.

As Berchelt’s music began playing, fans ran to position themselves and their camera phones to get the best view of the champion as he made his way down. The cheering was strong enough that I didn’t need to gauge who had the crowd, the Tucson Arena was officially pro Berchelt.

To no ones surprise, once we got the sound of the opening bell, the two met center ring greeting each other with one, two leather shots.

The crowd immediately responded by rising to their feet cheering, clapping and pumping their fists in the air, in appreciation for both fighters. The energy in the arena never decreased, but you could feel the uptick in the roaring cheers for Berchelt when he landed his thunderous combinations and thudding body shots on Vargas.

Being a man that only knows one way to operate in the ring, the 34 year old vet kept coming, punching his way through the vicious onslaught he was taking, hoping that somehow, someway, one would slow the fierce 27 year old down.

I suspect Vargas, being the warrior he is, and having been in with plenty of other warriors, including the one in front of him once before, knew better. He knew this wasn’t meant to be, but with no quit in him, it was up to the man in his corner Joel Diaz to make the call for him, which he did before the start of the 7th round.

The crowd erupted as Berchelt (36-1-0, 32KO) climbed the ropes and raised his arms in victory, showing appreciation to all his fans. In his post fight interview he also showed his appreciation for Vargas (25-2-2, 18KO) as a fighter and for giving him his shot at a title.

Through the six rounds Berchelt and Vargas combined to throw 1200 punches, 728 coming from Berchelt. He continues to stake his claim as arguably the man of the 130 pound division, but there is little to argue that he is one of the most exciting to watch right now, officially taking the torch from Vargas Saturday night.

As for Vargas, what now? I think all the wars have taken their toll on him, most likely that was the case the first time these two fought. Personally, I wouldn’t mind seeing him in a hometown send off fight before hanging them up for good, I’d hate to see him become a gatekeeper for younger, fresh legged fighters testing themselves. But Vargas, like so many others in this brutal sport, think like a fighter and want to continue the life of one. Guess we wait and see.