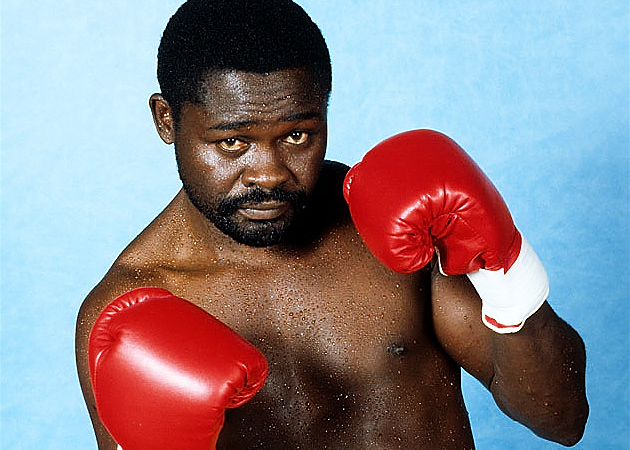 Known by a few simply as ‘Zoom’, by some as ‘The Professor’ & many as ‘The Road Warrior’, ♛🇬🇭Azumah Nelson (38-6-2, 27KO) was the pride of Accra, Ghana, and was the consummate professional, not just as a boxer, but also as an ambassador to the sport, and to the youth.

He was a heady, cerebral boxer in middle distance, who also possessed heavy hands, and solid all-around fundamentals wrapped in sheer aggression to round out his overall repotoire. Zoom had every punch in the book, and made sure that you knew you were in a fight with him by the nights end, no matter who was standing across him, and cemented his place as one of the best fighters of the 80’s and early to mid 90’s.

Nelson won Gold in a couple of tournaments in the amateur ranks and put together a 50-2 record en route to moving up to the professional ranks back in 1979. Fighting his bouts exclusively in Ghana on his home soil, he found his major opportunity 3 years later in 1982 by working himself up to a world title opportunity against not just a Champion, but outstanding Lineal Featherweight Champion Salvador ‘Chava’ Sanchez.

Sanchez despite being just 23 years of age had cemented himself as a legend, most notably for taking care of Danny ‘Little Red’ Lopez twice, and the way he finished off ATG Wilfredo Gomez 1 year prior. Azumah despite only having 13 professional bouts did more than hold his own against the dominant Champion, in fact he turned it into a real competitive fight through 14½ rounds, one that pushed the Champion to dig down deep into the depths of his talent to hold off the challenger. Nelson may have lost the fight by TKO in the 15th round, but he raised the antennas of every pundit watching, recognizing the type of talent that was on display. The unfortunate thing is that we, nor Azumah would get a re-match due to Salvador Sanchez tragic untimely car accident that claimed his life soon after their fight, and of course, the main unfortunate circumstance of this situation being that a man lost his life at the young age of 23, but I digress. Azumah continued to impress, and 2 years after his original shot, found himself going up against another future Hall-of-Famer for a world title shot.

Who was the great that Nelson had to get through to get the hardware? none other than Wilfredo ‘Bazooka’ Gomez, who had the exact same WBC Featherweight title that Sanchez had.

It was a thriller which showcased fiery toe-to-toe exchanges inside, and middle distance, with both fighters finding moments to stagger each other with their power to the amazement of the San Juan crowd in Puerto Rico. Zoom rocked Gomez badly in the 11th and never let up, raising hell towards finishing him, putting Gomez down, then after Gomez got up, bombed him with a nasty cross to the body, jab, cross 3-punch combination that slumped Gomez to the canvas, and after careful observation by the Referee, waived his count off to the crowds shock, and Azumah’s jubilation in celebration with his people of his monumental feat that he had just pulled off, becoming a World Champion.

His reign as a Champion was very solid with consistent performances in 6 title defenses, defeating very good competition. In 1988, he moved up to Super-Featherweight for a vacant title opportunity against Mario Martinez, and though a difficult fight, The Professor was able to win the belt, making him a 2-Division World Champion. Exhibiting the same level at Super-Featherweight that he showed at Featherweight, Azumah continued his run, and eventually knocked out Mario Martinez in a re-match a year later after their title fight to officially put any doubts to rest. In 1990, Azumah tried his luck by moving up a division to face one of the slickest fighters to ever put gloves on in Pernell ‘Sweet Pea’ Whitaker, but it didn’t go well because of that slickness, and Nelson couldn’t muster up a sustained attack despite pressing the action in the fight. Despite falling short to Sweet Pea, Azumah still had his Super-Featherweight title, so he moved back down. He fought excellent boxer Juan Laporte and won via unanimous decision. While Azumah was starting to decline a bit, his level of competition didn’t, which included 3 fights with Hall-of-Famer Jeff Fenech, where they each share a record of 1-1-1 against each other.

Azumah also met the grizzled Gabriel Ruelas twice, with Nelson winning a majority decision the first time around, and securing a knockout in the second fight. Azumah also had a memorable quartet with iron-clad Jessie James Leija, one that Leija enjoyed having a 2-1-1 record edge against Nelson. All in all, Nelson had a storied career up to his retirement in 1998, with a brief comeback in 2008 for a grudge match against Fenech. Nelson was certainly a dangerous fighter, and his legacy is one that should continue to be upheld and remembered as time passes. Here are a list of his accomplishments.

SIGNATURE MOMENT – Knocking the great Wilfredo Gomez out on the road in front of Gomez home crowd to win his first world title, the first installment to him earning his nickname ‘The Road Warrior’.